The Review / Die Antwoord – Suck On This: Pre-Candy MixTape

If you’ve never listened to Die Antwoord before then you’re either in for a great awakening or great repulsion on this new MixTape. For sure, it doesn’t pull the punches or sexual imagery and isn’t in the least subtle. But did you really expect subtlety from Die Antwoord? 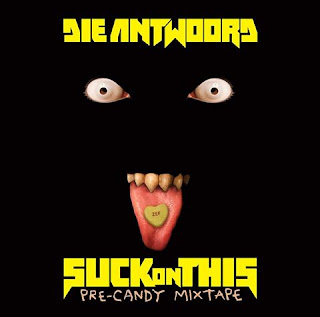 In a way that’s one of the pleasures of listening to Die Antwoord, you know just what you’re going to get. Suck On This returns to the formula of the first two albums rather than the slower sex grooves of Donker Mag and it’s a joy to listen to. Be it an appearance from Dita Von Teese on the rather entertaining Gucci Coochie or the frankly alarming cover art that strikes just the right tone between scare and laugh out loud crazy.

Certainly, this is right back to the dirty grooves of Tension and keeps the more developed production of Donker Mag. Even the skits, or verbal interludes actually work and serve a greater purpose than just being there and don’t ruin the flow of the beats. Additionally, the remixes of past highlights such as the vicious but brilliant Pitbull Terrier are genuinely worth the amped up beats they’re imbued with.

But one thing is certain, if you haven’t liked anything Die Antwoord have released previously there is little chance you’ll be converted here. But that’s probably just how they would like it. Do you imagine they give a f---? Unlikely, but for those already converted there is joy to be found and the mixtape really is freeky (sic) and likeable. A nice mix of their gloriously insane early Id Rap phase and the later slightly more sensual but no less insane sound makes this slightly more accessible but still not something to soundtrack your next dinner party!

Listen to ‘I Don’t Care’ (feat God) and there is much to be derived from the mellow rave beats and it’s nice to hear an ‘Antwoord track like this, less use of expletives and more consideration for sonic textures. But to quote Ninja, woah! Listen to ‘Bum Bum’(feat God) and it’s pretty much just what you might expect from a title like that, maturely produced but not by any stretch of the imagination mature in its lyrical content. We get that Ninja likes ‘fucking ‘a lot but let’s have less commentary on it hey guys?!

But minus the constant references to sex and repetition there is much to be enjoyed here, a lot more of Yolandi’s compelling rap and more of the beats that characterise their work. The next album? Bring it!