Released on own label, the perfectly named Respectable Horse Records, the long awaited album from Emily and the Faves is finally out on the streets. And whilst plans are already rumored for the follow up, it's about time we have a listen to this one! 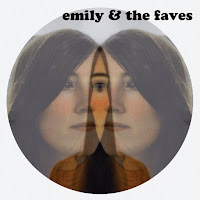 The cover features twin Emily's joined at the eye and this perhaps symbolic image is a good indicator of the songs themselves, with many of them carrying a deceptively simple yet on further listens never less than captivating melody. Perhaps familiar to those who were paying attention from the very beginning will be Golden Hair and Sometimes, which received a rapturous welcome at the launch event for the album.

Both showcase the psych influences of the band and the catchy melodies that invade your psyche with a subtle strum of instrument. The contemplative nature of Sometimes is continued in I Never Saw in which introspective lyrics merge with the melodic, acoustic psych flavored backing. Another highlight is the humorous yet on the surface melancholic My TV, in which the redemptive joy of said TV is sang about and brings a smile with the lines 'TV will be the death if me/ But hopefully not literally.'

Needless to say, the remainder of the album continues in the same excellent vein of retro-modern cool that is as accessible to the casual listener as it is possible to listen many times over. Your mission, should you decide to accept it, is to track down  this record and enjoy it many times over! (And listen to the hidden track!)