The announcement of Stealing Sheep’s long awaited full length album was greeted with much enthusiasm. With its August 13th release date rapidly approaching Seba Rashii Culture took in the sounds that will bring their songs to the many ears they surely deserve… 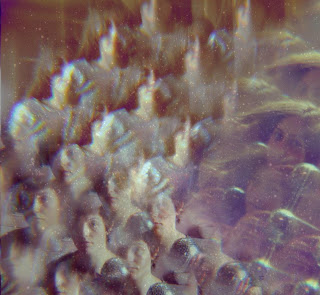 Into The Diamond Sun welcomes the listener with a glittery cover that befits the title and if a title ever deserved good music to go with it then this is it. Of course, that’s not a worry when the trio deliver a set of songs that impresses on many levels. It seems a long time since they released their first E.P. but on this album it’s clearly the start of a new journey for the band.

Highlights include the subtly acerbic White Lies, with a percussion line that carries the song along nicely. Its lo-fi production and marching beat make it easy on the ear and the bands trade mark harmonies are right in place. Genevieve, with its psychedelic production is also an addictive listen, with its retro production feel giving it a warm glow that envelops the whole album.

Our personal favorites though are the submerged yet glittering harmonies of Gold, the humorous lyrics of The Shark Song that tell a story using shark metaphors (“They are probably really friendly, but I just want to swim away…”) and the cheeky lead single Shut Eye provides a real clue to how good future work from the band could be. Its brass line is at first deceptively misplaced yet after a few listens it becomes one of the songs key points of reference and becomes a firm favorite.

A good debut long player from the band then but with so much creativity oozing from their work, and indeed their home city of Liverpool, there are surely bigger things to come for the trio. But in the meantime savor this album over your favorite cordial!