Punk has grown and developed over its comparatively short life as a musical genre and Sauna Youth’s latest album Dreamland opens with the marathon that is Town Called Distraction... 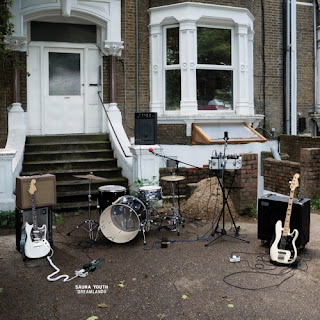 Those familiar with the Velvet Undergrounds more experimental pieces will be in safe territory here as a percussion and distortion informed backtrack soundtracks a monologue that catalogues the titular distractions of two people on the way to meet.

The calm delivery is at artful odds with the aforementioned punk backtrack and it’s an introduction to a music world where things can only get louder. Literally! Segueing almost immediately into Planned Design it’s a kick into gear that impresses. With an effortless energy the band tread a familiar path with new shoes and create a harmonic two minute epic that fades out as quickly as it arrived. Snapback follows a similar pattern and the resulting sound is a refreshing burst of air that keeps the cool flowing easily.

The comparatively slower in pace Psi Girls follows in swift succession with the albums highlight Hairstyles jumping Strokes –like into the speakers with a gritty but well balanced sound that impresses as the chorus and guitar speed up in energetic unison to a finale that is worthy of note.  Its static driven bass line fades into the ether and the void is soon filled by Viscount Discount. It’s a finale to remember as the excellent guitars make a potent reason to listen to the album many times over.

The end is literally the beginning of a new favourite band and album that are set to entertain the listener many times over.  In its brevity Dreamlands is a listen that remains fresh for many listens over and if you enjoy your music fast and furious then look no further!