Are you sitting comfortably in a tall tree in an ancient forest full of enemies and booby-traps? Are you an expert in combat and espionage, with survival skills to boot? Does the prospect of battling an army of rebel warriors strike you as a challenge to win rather than a run away from prospect? If so... this book may well make you very angry. Welcome to Ninja Attack! 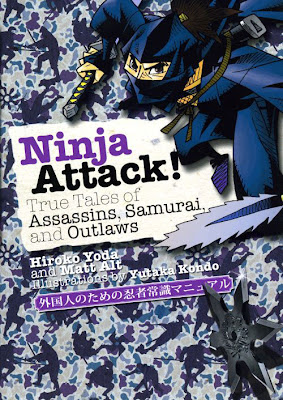 If you've ever watched a ninja movie and wondered just how those guys did it then this book may provide some answers. Following the successful Yurei Attack! comes Ninja Attack! and it's as good as it sounds. Recently reissued in an expanded version it's a testament to the singularly fascinating history of Japan and with some cool illustrations to boot.

As ever it's a break down of some colorful characters from the past with some hints on how to survive the inevitable attack. Of course, this being ninja themed the attack is one that would be hard to fend off without some pretty advanced techniques but as this demonstrates, even ninjas aren't infallible as these fascinating histories reveal.

The beautifully illustrated chapters spare none of the associated gore and by themselves would make an excellent visual treat for the more artistically inclined. Formatted so as to resemble a manga publication it's an excellent and suitably addictive read. In almost ninja like time you've reached the end and want to read it again. But as sad as we are that Ninja's no longer exist in our world (at least in the historical form - what of the digital ninjas hacking as we speak?) it's easy to see that the authors lavished much time and love on this project and for that we can only be grateful.

For sure this is a publication of great value and reading this in it's home of Japan (especially Tokyo) feels truly magical. With many of the heroes of the book honored by a shrine in the city you can truly participate in the legacy of the ninja and samurai by paying a visit to their spiritual homes. In some cases their remaining belongings are on display as well so if you're in Japan make sure to pay a visit to the shrines and thank them for making Japan the cool place it is today.

Of course, the past has buried many of the ninja's secrets and perhaps rightly so for such an influential force that used mystery to their advantage. If it wasn't for the Ninja, Japan would be a very different place indeed.

Words by Sebastian Gahan.
Ninja Attack! is published by Tuttle and written by Matt Alt and Hiroko Yoda. Illustrations are by Yutaka Kondo.