Earlier this year we reviewed Ali Ingle's first E.P. 'The Man and the Monster' and enjoyed what we heard. Just as the year turns he's releasing another E.P. entitled Magic in the Mundane. We check it out below... 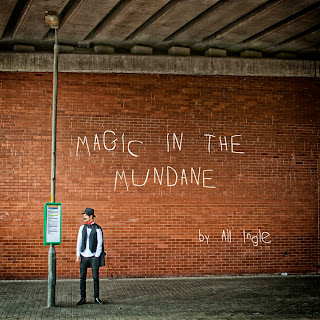 When we listened to Ali Ingle's previous release 'The Man and the Monster' we enjoyed the warm yet generously rough qualities of his voice and folk style. It's follow up 'Magic in the Mundane' is brighter in it's production yet retains the dark undertones of  it's predecessor.

'Leaving Home' opens with the imagery of a girl determined to explore the world beyond the tv and the rhythms evoke the wanderlust perfectly. 'Ribcage' is a more stripped down prospect, it's undertones of melancholy balanced with the hope of the lyrics themselves. Ingle's voice once again transforms the song into an almost fairy tale like take on reality.

But on the barren melodies of Empty House it shines as the duet lets the piano take the front and effectively realizes the lyrical device of 'love being an empty house'. There's more subtle piano on 'Medicine' and it the perfect closer to an E.P. that is bathed in the tones of winter with the lyrical warmth of the summer months. There is certainly nothing of the titular old routine here with developments in both songwriting and style most evident.