One band guaranteed to warm up a cold evening is Mashemon. With their witty, intelligent and very often dark lyrics and happy synth melodies they certainly make a gig worthwhile. With a new E.P. out now - grab it while you can from Liverpool's Probe records or News From Nowhere - and gigs on the way we took this chance to
give the bands' Ronny ten questions... 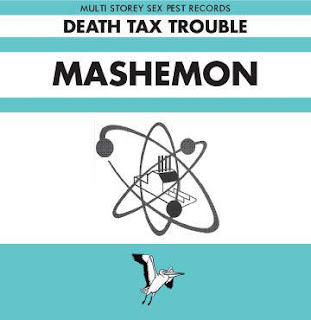 #1 Hi guys – it’s been a while since our last interview way back in 2010. How are things with the band?
Ronny: Things are going very well. Since 2010 we’ve done a pile of gigs, broken some strings, had some hangovers and released another 3 EPs.  Furthermore I am now A Man With A Beard. It seemed like the right thing to do.

#2 There are rumours of a new E.P out soon for the world to consume. Tell us of its charms…
Ronny: The rumours are true! Our second EP of the year is being launched on Saturday 15th December at the Pilgrim. It has a number of charms, spread across 5 songs. It is probably our most Pop collection so far, although when we try Pop it inevitably gets a bit skewed and distorted. It’ll be available for free in Probe and News From Nowhere but if you hand over £3 at the gig we’ll give you a Best of Mashemon CD as well. My personal high point is the line “tongue against alveolar ridge”. Classic rock.

#3 The end of the word may well be upon us soon. Where would you like to be if the Mayans are to be believed and what will you be doing?
Ronny: I would be keen on being on a world that was not actually ending. I’m sure there’s a high chance that somewhere out there in the vastness of the cosmos there is a place where I would fit right in and where people who make electro-rock nonsense are treated like kings. That’s were I want to be.

#5 We were recently listening to Removal Music and it still hasn’t lost its charm. Any plans for a second full length release?
Ronny: Funny you mention that. Plans are afoot to create our second long player next year. The EP launch gig will mark the first in a series of 5 monthly gigs in which we will be playing a new song and dropping an old one. We’ve got two in the set already so by April we should have 7 new tunes rehearsed up and ready for the studio. Add a couple more to that and we will have a whole album’s worth. With luck and a following wind it should all be ready for September 2013. That’s the plan anyway.
So if people want to witness the genesis of this new masterpiece they can turn up to the gigs and see it all take shape.

#6 You’ve augmented the band with a third member in the last year. How has this changed the dynamics of the band?
Ronny: Bringing Andy in to play drums was a stroke of genius which we have been congratulating ourselves for ever since. He’s brought a lot to the band, not just with his drumming but with all his musical knowledge and production skills, not to mention the fact that he has his own recording studio! He gets the best out of me as well, with his unique motivational phrases:
“Do it again, only do it properly.”
“Do it again, only do it so it is less shit.”
“Do it again, only in tune this time.”
“Just do it again.”
In the past couple of months we have expanded even further with the inclusion of Matt on guitar and we seem to have had another stroke of genius. Matt is a great guitarist and a thoroughly decent chap to boot. And he’s a scientist, which is an area in which we were lacking previously. So we’re growing apace, like some kind of awful, awful diseased carbuncle.

#7 One element of a Mashemon gig that many enjoy is the visuals. How are they conceived and what is the bands favourite?
Ronny: The visuals are all Mike’s doing. He seems to be able to track down the most obscure and brilliant bits of film to put to the music. My current favourite is the film he has done for new song Catalogue. It’s absolutely brilliant.

#8 You’ve played gigs all over Liverpool. Where’s your favourite venue?
Ronny: We’ve really enjoyed gigs at the Lomax, they make us very welcome there. The Mello Mello has also been a good place to play. I think the best gigs we’ve done in terms of atmosphere have been the ones we did in Next to Nowhere. We are trying to recreate that vibe with the upcoming Pilgrim gigs.

#9 One of our most loved songs is Frank Bloke. Was it inspired by anybody? (Feel free to lie if you can’t say!)
Ronny: I used to work as a hotel barman and Frank Bloke is really a composite of all the sorts of people I would meet on a regular basis. Bad, brutish monkey-men who stank of booze, fags and violence. I wouldn’t be surprised if somewhere out there is someone who perfectly matches the character in Frank Bloke, but I wouldn’t want to meet him, at least not without a big stick.

#10 Finally, give a quote to describe the year 2012 as it was for you!
Ronny: 2012 was a gateway year, like a Class C drug or lingerie catalogue. 2013 will be the year that sends us to the hospital, the asylum or the cemetery. Merry Christmas Everyone!