There's a voice sample midway through this split album from Fawn Spots and Cumstain that says "I just think you're so full of magic! You're like a big round wizard!" and as we listened to the record we found some magic in the mayhem... 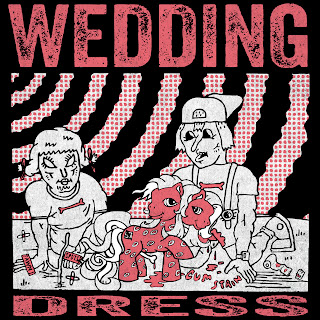 Split records can be a gamble. On the one hand they work well, with both bands mixing their songs together well but on the other the contrast can jar noticeably. Thankfully, this isn't the case with Wedding Dress. The split release from Fawn spots and Cumstain is at once somewhat jarring (as punk is meant to be) and cohesive and that's where the magic lies.

Fawn Spots open up the record and the deceptively quiet guitar soon bursts into punk life Tailor Made wends it's way to a melodic conclusion filed with just enough crash, thrash and distortion to thrill. Indeed their selection of songs are all in the same vein with our personal favorite being National Anthem. With it's dark guitar lines bringing an almost regal nature to the song before a classic drum and guitar stomp comes in it's a good listen.

Cumstain open their half with Ghost Love and their sound is imediately different from their album mates. There's a barer boned production with the use of drum machine adding an indutrial edge to proceedings. The double tracked and distorted vox are jarring to say the least on first listen but for those well versed in their punk it won't pose any issues. The bands six tracks are all under two minutes in the best tradition of the genre and that makes all the difference. They say it to your face and move on and on tracks like Bloody Fingertips they tap a rich vein of audio simplicity that impresses all the more. Our standout though is closer Rollin Wrong where the reverb is turned right down and a dream like guitar line adds a certain subtlety to the song.

A successful combination then for Fawn Spots and Cumstain. Check it out soon!