There must be something in the air Down Under for we've just heard another artist from Australia who has seriously impressed our muso tuned ears. If you only saw the visuals of Abbe May's video's you'd be justly intrigued but turn the volume right up to eleven and you're in for a sonic treat you're not likely to forget in a hurry.

Already carrying a sizable fan base in her native Australia, Abbe May is currently expected to announce UK release dates for her best of 2012 top rated album soon but in the meantime there's some music videos to savour. Check out the stunning visuals and beats of 'TROUBLE (T.R.O.U.B.L.E)' below.

TROUBLE (T.R.O.U.B.L.E) is the song so addictive in it's electro-industrial sonic mashup they spelled it out for you just to check you're listening! The title is spelled out in a sinister acapella intro before the industrial beats kick in and the lady herself rises from a black lake in the video. The verses are backed with a horror movie like key sequence whilst the screams that pierce the chorus are such that they stick to the listener's mind as easily as the best music does. There's a hint of the unhinged greatness of early PJ Harvey and the production intricacies of Garbage yet the music is distinctively that of Abbe May. This is soul piercing stuff, deserving of the massive success it's had already in Australia. 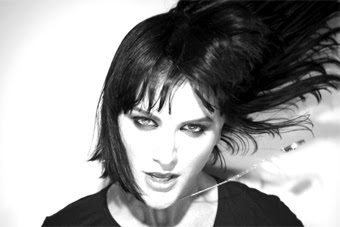