When we first heard the music of the self -titled (and definite) New Prince of Punk we knew he was a prospect for some consideration. We loved his debut album Paranoise Void and when we later interviewed him it was an EXCLUSIVE that many read and we enjoyed immensely. 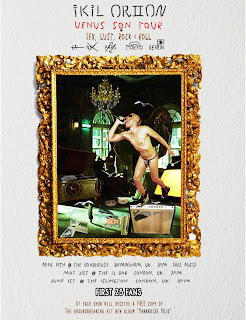 We recently received notice that the man himself will be over in the UK later this year and will be playing some shows. Confirmed dates are on the poster but keep your eyes to the skies for more info soon. In the meantime checkout the video for Zombie Walk, from Paranoise Void, below.

The man himself says:
"If the virgin Queen of Pop Madonna & the Guitar God Jimi Hendrix had a son...his name would be Ikil Oriion. Traveling at the speed of light the new crowned Prince Of Punk--- IKIL ORIION descends from Galaxy X to restore order to Planet Rock and eliminate the excess waste of bubblegum Pop. The mysterious NeXt Wave renegade is on track to hit the streets of London in the not so distant future. The ORIION star comes in peace and shines his beacon of light on the darkness of the music endustry. Being born under the sun of Taurus with a black moon rising in Scorpio, IKIL ORIION knows a thing or two about the blues. He channels the spirit of Bowie, Iggy Pop & Mick Jagger breathing life back into the heart of music. Why has this outer worldly being travelled so far you ask? To rid the world of the next American Idol! More hidden secrets will be revealed in the coming weeks when Mercury goes retrograde eclipsing Mars transiting into the Venus Son UK Tour set to launch early April." 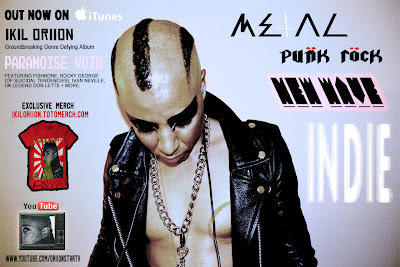