Each day this week we'll be bringing you interviews with creatives about the oft called wicked bean commonly known as coffee. We start with this lovely interview with Danny, from the self confessed "jazzy, proggy, spacey blues rock band" Termite. 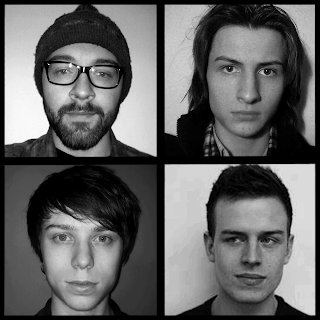 What inspired your song "Coffee"?
Our guitarist and I were lucky enough to spend a couple of months working overseas in China, as part of a project teaching young children music and dance. As regular coffee drinkers, we noticed there wasn’t much of an independent coffee culture in China; Starbucks and Costa outlets abound in the cities however, so we were able to get our fix. Drinking coffee in Yuexiu Park, Guangdong is a lovely experience, but perhaps not sufficient catalyst to inspire a song. Fortunately for us, however, this was at a time when revered Ghanian diplomat Kofi Annan was awarded the newly-born Confucius Peace Prize. We saw it one morning in the local paper while enjoying a couple of spiced vanilla lattes, and with this auspicious coming together of coffee and Kofi, it seemed absurd not to write a song about that moment.

What's your best experience with coffee?
Flying home-made Bermuda kites on sun-drenched Dover’s Hill, Chipping Camden, with a thermos of Java by our side, as Wagner’s Ride of the Valkyries gallops out of a portable radio.

What's the best coffee you've ever had?
You and your readers have likely heard of the notorious Civet Coffee, made from coffee beans which have been eaten and excreted by the Asian Palm Civet, a small weasel-like creature native to South-East Asia. The stuff is bombastically expensive, and we might never have had the chance to try it were it not for a friend of ours who spent a few weeks of summer working on a plantation out in Sri Lanka. His hosts gave him a little decorated tin of this brown gold as a parting gift, and he was kind enough to share a few drops with us. It’s a wonderful, earthy, smoky, Mocha-esque flavour, and nothing’s topped it since.

What link is there for you between coffee and culture?
The two are inseparable, in that a nation’s coffee-drinking habits grow out of its culture, and perhaps, in some instances, vice versa. An easy example: the more developed a country is, the greater the number of corporate coffee outlets one is likely to see whilst roaming one of its main cities. The vast quantity of Starbucks coffee shops in, say, New York is representative of the fast-paced get-up-and-go lifestyle of most New Yorkers, who want something quick and familiar, with the minimum of fuss. Similarly, as one travels from the (typically) rural North to the vibrant South of Britain, the ratio of tea-tasters to coffee-quaffers steadily skews in favour of the latter.