Eyes On The Box//Doctor Who: Series 7, Episode 8: The Rings of Akhaten

The story: The Doctor takes Clara to the world of Akhaten, where they meet a child called Merry, the Queen of Years, and a mummified alien god.

In a wonderful pre-credits sequence, we see the story of how Clara’s (Jenna-Louise Coleman) parents met and fell in love, and the importance of the leaf in Clara’s book, 101 Places to See. With the kind of beautifully succinct and moving story-telling seen in the first ten minutes of Pixar’s Up, this sequence sets the scene for the episode that follows and most likely for the rest of the series. 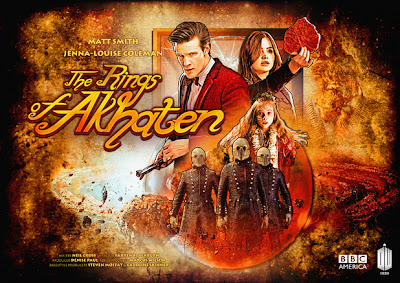 The Rings of Akhaten sees the Doctor (Matt Smith) taking his new companion to the alien world of Akhaten where its inhabitants believe the whole of the universe was born. As he arrives on the alien planet, which is filled with a Star Wars cantina-style array of alien creatures, the Doctor is at his child-like best as he quite literally loses himself in a gorgeously designed steam punk set.

Clara, left alone, discovers a scared, lost child called Merry, the Queen of Years, who holds in her mind all the songs and all the stories of her world and she convinces Merry to overcome her fears and sing for the old god, entombed within the Pyramid of the Rings of Akhaten.

What follows is a tale of religion and belief and what happens when these things are built on a falsity. The old god is nothing of the sort; it is in fact “a parasite” that lives on souls, and souls are made of memories. Even the currency on this alien world is that of treasured items, such as the ring Clara’s mum gave to her.

There are themes that are familiar to Doctor Who fandom. One is the choral singing we’ve seen before in A Christmas Carol and from the song of the Ood from David Tennant’s final episode, The End Of Time, Part 2. Huge credit here goes to Murray Gold for the wonderful music that accompanies the waking of a god that has slept for millions of years.  There is also a now familiar scene of the Doctor giving it some “Come and get me, son” postulating to a threatening alien.

This episode, directed by The Fades helmer, Farren Blackburn, is probably the most beautifully realised that we’ve seen in quite some time. The costumes and set design are simply breathtaking.  Neil Cross, the creator of Luther, gives us a script that’s loaded with thought-provoking stuff on religion and belief and contains a wonderful piece delivered by the Doctor to Merry about creation and the uniqueness of every single one of us that lifts wholesale from Lewis Carrol, “shoes and ships and ceiling wax....cabbages and kings.”

The Rings of Akhaten is ultimately a tale of children and childhood and the telling of tales.  As Clara uses “the most important leaf in human history” to see off an alien threat that never feels quite as threatening as it could be, we’re left in no doubt whatsoever that Coleman is a worthy and wonderful new companion.

Raising more questions about Clara than it answers, this episode further sets up the mystery of the impossible girl for the Doctor to solve.

I didn’t know that: Emilia Jones, who plays Merry, is the daughter of real life warbler Aled Jones.

Nods to fans: The Doctor has been to Akhaten before with his grand-daughter, a nod to Hartnell’s first Doctor.