The story: It’s 1974 and Caliburn House is haunted. But by what?

Luther creator Neil Cross caused much debate on the old interweb a couple of weeks back with his Doctor Who episode The Rings of Akhaten. Some loved it; some hated it enormously. Hide is likely to be far less divisive and rightly so, as it’s a far more gratifying episode. 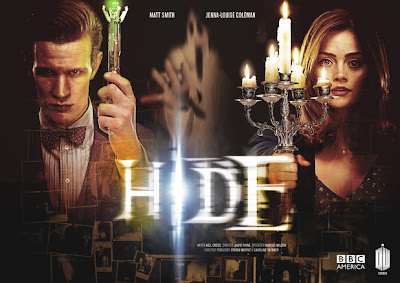 The Doctor (Matt Smith) and Clara (Jenna-Louise Coleman) arrive at Caliburn House, where the ghostly form of a woman who appears to be haunting the place is being investigated by Professor Alec Palmer and his assistant, Emma Grayling (Dougray Scott and Jessica Raine).

This being Doctor Who, the ghost of course was no such thing, but a girl from the future trapped in spooky forest in a pocket universe being chased by a terrifying creature. The sonic screwdriver is rather pleasingly left alone for much of this episode as the Doctor and Clara sprint across the universe to gather the things needed to harness Emma’s empathic psychic powers and for the Doctor to rescue Hila (Kemi-Bo Jacobs) from the pocket universe with a very uncertain, “Geronimo.”

Clara’s uncertain relationship with the TARDIS is further explored here, and the scene where the TARDIS Voice Visual Interface projects an image of Clara to herself is almost a glass of Lambrini away from a hair pulling bitch fight. Lovely stuff. But ultimately, the TARDIS comes good, lets Clara in, and takes her on a crash-bang-wallop trip to rescue the Doctor and Hila.

“This isn’t a ghost story. It’s a love story,” states the Doctor. And this is true on more than one level, from Alec and Emma’s awkward, unspoken love for each other to the slightly silly monster in the wood looking for his long lost love story.

Alec and Emma’s relationship is a mirror to that of the Doctor and Clara, with Alec reflecting the Doctor’s brilliance and aloneness. In a wonderfully touching scene, Alec and Emma discuss deceit: The Doctor’s inherent deceitfulness, “Experience makes liars of us all,” and their own deceit in hiding their feelings for each other. It’s beautifully played by this week’s excellent guest stars.

Despite the somewhat rushed and slightly daft ending, Neil Cross has redeemed himself with Hide, which is ultimately a finely drawn tale with much to please, without totally scaring the kids. The 1974 setting gives the set designers the opportunity to deploy much in the way of delightfully kitsch 70s design and clothing. Emma’s wide collared shirt and Argyll patterned tank top put me in mind of Miss Anderson, my second year junior school teacher.

But I digress.  This episode also does a neat job of setting up next week’s Journey to the Centre of the TARDIS, the latest TARDIS-centric episode since Neil Gaiman’s The Doctor’s Wife, which is one of the most highly regarded episodes since the series re-started in 2005. Some big boots to fill, then.  Can’t wait.

Did you know: Jessica Raine is playing Verity Lambert, the founding producer of Doctor Who, in Mark Gatiss’s An Adventure in Space and Time as part of this year’s Doctor Who 50th Anniversary celebrations.

Fan pleasing moments: The return of David Tennant’s orange spacesuit, the Doctor looking for an umbrella stand in the TARDIS, “I think I had one”, the Cloister Bell sounding, the Metebelis Crystal, “Doctor what?”