Interview// An Interview with Love Artuk: LOVE in Darkness and Light.

Have you ever found love on the street? Early in 2012 we were walking in Liverpool's up and coming Baltic Triangle area when we saw it. On a wall, bright in the afternoon sun, the word LOVE. The photograph that you see here was taken on that occasion. As the weeks went by more LOVE tags were spotted around the city centre. As a follower of the street art scene in Liverpool I was fascinated and began looking for them as I went about my business sometimes finding them sometimes not. It was much later in the year that my interest peaked again... 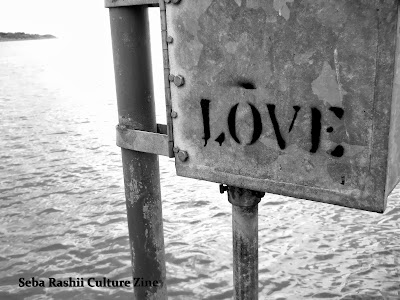 The Love Art exhibition was announced and when I saw a mysterious looking flyer on social media I was determined to find out more. Love will make you do many things, including going to an exhibition. The venue was the Clove Hitch on the suitably named Hope Street and I was suitably wowed by the sheer amount of work the artist (who I had not yet met) had created. The sheer melange of styles from the abstract to the straight forward took me into the world of Love they came from and I seriously wanted them on my wall.

I also wanted to meet the person responcible for creating such utterly captivating art from a single, diversely interpreted word - LOVE. Our first attempt was excellent, bu in an ironic twist on the efficacy of modern technology the data was lost when it gave up life half way through transcribing. So rather than give up on the excellent chat I enjoyed with the artist and his very attentive dog Bailey I sent some questions over. Maybe one day we'll see the first interview but for now we have this one...

S.R.C.Z: Tell us how Love Artuk came to be. What lead you onto the path of spreading the love in such a creative way?

Love Artuk: After suffering from a mental breakdown due to several factors which were, Post Traumatic Stress brought on from serving on numerous military operations for the army and also 2 relationship breakdowns one of which was related to my daughter.

I couldn't understand how LOVE could be used as a weapon or some sort of bargaining tool. Whilst admitted to Broadoak Unit, Broadgreen Hospital for depression and several suicide attempts I started attending Occupational Therapy to do some painting and it was there that I decided to turn my negative thoughts about LOVE into positive using LOVE art as a direction for my own therapy and as time went on I totally absorbed myself into my own mission of highlighting LOVE to anyone and everyone (LOVE Artuk was born)

S.R.C.Z: They say that love is often something we forget to acknowledge properly. Would you agree?

Love Artuk: Yes, if you LOVE someone then tell that person everyday of your lives. We live in a world that has turned materialistic more so than ever, however there is no excuse for not appreciating an emotion which is a gift in us all which allows us all to give, take and share.

S.R.C.Z: Earlier this year you had your first solo exhibition. How did it feel displaying what was frankly a large collection for the first time?

Love Artuk: I felt very nervous but also excited. Nervous because I was unsure of how people would take to my LOVE Art and also was the art really good enough to showcase at an exhibition. Excited because my mission was being highlighted even more.

S.R.C.Z: When we first did this interview you mentioned getting in contact with Pest Control, Banksy’s representatives about your art. Could you recount that story again?
Love Artuk: Banksy is very much an educator with his own street art and that is what inspired me to get in touch with Banksy's PR company. I e-mailed Banksy/Pest Control explaining how I had come to find art through a breakdown and how art has turned my life around. I didn't expect a reply from 'The man of mystery', however 2 weeks later I received an e-mail from Pest Control stating that Banksy had read my e-mail and sent his support in what I was doing with LOVE Art and to continue with my mission. I felt totally honoured that I had been acknowledged by Banksy and his people. 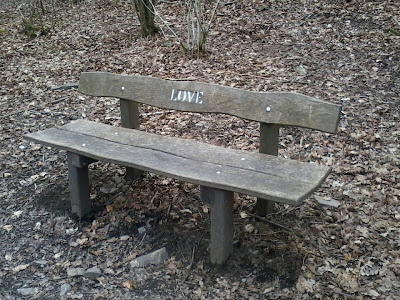 S.R.C.Z: When I first saw your art work it was on a very particular venue. That is, the streets. How did you decide just where to place the distinctive tags that surely make many a passerby’s day?

Love Artuk: I would like people to stop and think about the word LOVE and what it means to them and hopefully the LOVE tag will put a pause on someones life and maybe highlight LOVE to them.

S.R.C.Z: Perhaps it’s connected to being discreet but many of the tags are in locations not often easily found. This reminds me of the saying that ‘love could be around any corner’ - did you decide to place them in those locations for any specific reason?

Love Artuk: Sometimes I choose random locations for my LOVE tag in a way that it will be seen by a lot of passers by or sometimes I like to place it in not so obvious locations because just like LOVE itself it can literally be anywhere and everywhere.

S.R.C.Z: Has street art influenced your quest in spreading the word of Love?
Love Artuk: Street art is my platform for my LOVE tag as it can be seen from anyone form any walk of life and street art is in most cases educational and you can view it free of charge.

S.R.C.Z: Although love is a universal element, we all see it through a different lens. How do you see love?

Love Artuk: I see LOVE as a gift in us all, it doesn't come with instructions or a map, but LOVE can and will breakdown any wall put up in front of it. LOVE is the most sacred gift I have.

S.R.C.Z: There are some impressive pieces amongst your work.  What stands out as your personal favourite?

Love Artuk: My favourite LOVE art piece would have to be 'The Love Letter' as it defines an old school romantic touch and in this current society we text/e-mail and slightly lose the true meaning behind a Love letter. There are values in us all which can fade away if we allow it to.

S.R.C.Z: Since we talked last time I’ve noticed some new Love tags appearing on the streets.  Certainly, around Valentine’s Day and since then as well.  What are your creative plans for the near future?

Love Artuk: My creative plans for the future of LOVE Artuk is I am currently working with a film director who attended the LOVE Artuk exhibition and we are making a short film titled 'LOVE'S War' which is based on a Battlefield/Trench in the 2nd World War and I have also created my first LOVE Art film prop. I am also in talks with a Youth Centre in Kensington, Liverpool to do a LOVE Art wall piece and hopefully I will also be a part of 'Coffee Culture'.

S.R.C.Z: One of the ideas that came to me as I thought of Love Artuk is the juxtaposition in the beginnings of the work. Sadness brought forth a positive take on creativity and in many ways that’s life how goes. It brings to mind the idea that we never see things changing, we only see them ending. In hindsight how do you view the earlier Love Artuk creations?

Love Artuk: My earlier Love Artuk creations were very much based on the dark side to LOVE as at the time I was in a very dark and negative place. I now know that it is not LOVE that can break your heart but it is the person that you shared it with.

S.R.C.Z: Finally, is there anywhere you’d like to spread the Love Art to in the future?
Love Artuk: I would like for LOVE Artuk to become LOVE Artglobal in the future and I want to work with charities, hospitals and anyone else basically who would benifit from the sales of my work.

You can check out more LOVE Artuk at the official website. Look out for LOVE on the streets if you're in Liverpool anytime soon and consider just what it means to you...