The Comix Column #1: Free Comics Anyone?

In any crowded city street, where ever handle bar moustached hipsters hang, or scene students see the latest indie bands the iconography of the superhero can be plainly seen; the shield of Superman, the Bat symbol and even the once lesser known Ironman and Ghost Rider adorn t-shirts and belt buckles and are splashed over girl trendy’s back packs where Hello Kitty and their ilk once was. The comic book heroes of yesterday are in vogue and are cooler than hell- and even more importantly they are accepted.

Once comic books were for hobby specialists but since the eighties when simply changing the word ‘comic’ to the more high brow sounding 'graphic novel' (and helped by the movie phenomenon of Tim Burton's Batman) superheroes and comics have become more and more embraced by mainstream media and general public alike. So how do comic book companies capitalise on this? Three words- Free Comic Day. 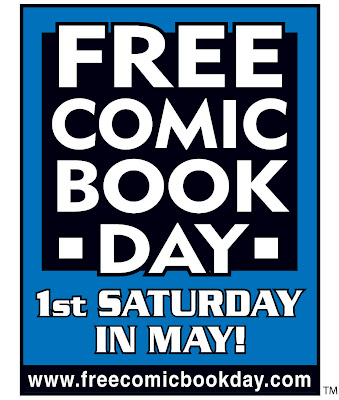 They say there’s no such thing as a free meal in this town but come May 4th, at your local comic shop, there’ll be something much, much better; free comic books. On that day you will literally be able to pick up a bundle of free publications to read, to hand to curious friends, to covet.

For the uninitiated it will be chance to see without paying a penny  (not even a penny!) where all those characters in the summer blockbuster movies of the last decade have originated, gestated and sprung fully formed from. The list seems endless: Nolan’s Dark Knight Trilogy to Raimi’s Spider-Man films (and the more recent reboot), the violent and quirky Kick Ass through to Watchmen and the raft of Marvel movies that started with Ironman and led up to Avengers and not forgetting indie darlings such as Ghost World and American Splendour on the way.

Since the popularity of Blade and, even more so, Bryan singer’s first X-Men film Hollywood have mined the rich potential of comics for ideas. Why? It’s a readymade concept- plot, characters, storyboards, art direction already thoughtfully put together and tied with a big bright bow by other creators; all the execs have to do is grab a comic they like (or think has money making potential), show it to the studio and half the job is done.

So if like millions of cinemagoers you’ve always wanted to go to the birthplace of these wondrously imaginative characters and see what all the fuss is about, now’s your chance. It took awhile for Hollywood to seize this opportunity because as I child all I had was my chewed up videotapes of Donner’s Superman with Christopher Reeve and the aforementioned Burton’s Batman but now it seems there is almost as many films in production as there is comic book titles in a comic book shop.

If you are a lapsed fan or even a devout, voracious reader of these four colour funny books here’s a chance to try something new (yes new, habits form quickly and strong! Lets break them) and there’s a hell of a lot to choose from. So on Free Comic Day what are titles, what can you choose from and where can you get them? Let’s break the list down and take a look...

Starting with the big two (as they are known in comic book circles) DC Comics who publish Batman, Superman, Green Lantern and the Justice League are offering a Superman comic called Superman Special Edition. Now this is because going back to what I was saying earlier the general public know comic book characters mainly (and specifically superheroes in this case)  from films and there is a new Superman movie coming out this summer- Man of Steel- as well as a new book entitled Superman Unchained- so DC are tying their title in with that.

It also nicely fits into the fact the character is 75 years old this year so they’re using all this hoopla - there’ll be a ton of media coverage - to hook in new readers who may have a given up on the character as being old and overplayed and show that there’s still life in the old dog yet. Using one of their top writers, Scott Snyder, and most popular artists in Jim Lee is very savvy in my opinion.

Marvel, they who publish Avengers, Spiderman, Captain America, Hulk are publishing ‘Infinity’ as their offering to the day. This is a book on a cosmic scale that will kick off a storyline that will touch most of the Marvel Universe in some way and this is your chance to get in on the ground floor.
However if you like your supers on the more quirky side there’s Valiant Entertainment who have the Harbinger Wars, which is their version of a big crossover event, setting up a storyline that involves all their main books. But it isn’t all capes and masks, comics like any art form is as eclectic and wide-ranging as a creator’s imagination will allow. Not only popular but award winning, independent and ‘alternative’ comics produce graphic novels that sell in your local bookshop as well as your local comic store.

An interesting looking book is that of Dark Horse Comics’ Mass Effect/ Killjoys/RIPD, if only just for the Killjoys part. The True Lives of the Fabulous Killjoys to give it its full time is partly based on the My Chemical Romance album of the same name written by its lead singer Gerard Way. Now whether you love, hate (or even are indifferent) to the recently split MCR, Way has proven himself to be a highly imaginative writer on his two  Umbrella Academy miniseries in recent years (also by Dark Horse) so this is definitely  worth taking a look at.

If you want a brand you can trust in and are looking for familiar and popularist names you’re spoilt for choice. The TV shows Grimm and The Simpsons (under the name Bongo Free for All) have comics available, there’s a free copy of 200AD as well as a solo Judge Dredd title. We have Buck Rodgers, Tinkerbell, and computer game hijnks with Megaman and Sonic the Hedgehog and the original Walking Dead in comic form.

The great thing about Free Comic Day is that publishers really step up to the plate when it comes to kids comics. Bizarrely comic books are generally not suitable for children today but there’s a whole rack of them to choose from on FCD. There’s the wonderful Molly Danger from Action Lab Entertainment to the wonderful ‘New York Times best selling’ Stuff of Legend by Th3rd World Studios.

There’s also the delightful Archaia Entertainment’s Mouse Guard, so pick up a copy of that to see why it’s so critically acclaimed. But to really get your kids on side I suggest grabbing a copy of the anthology Top Shelf Kids Club (from Top Shelf). It’s absolutely brimming with cartoon strips of fantastic characters like Owly by Andy Runton and Johnny Boo by James Kochalka.

Even DC and Marvel have got in on the act with kid friendly books all which are based on various upcoming animated series. DC have Beware the Batman a child friendly version of the eponymous caped crusader and Marvel are releasing Avengers Assemble/ Hulk and the Agent of SMASH: the first half of the title based on an upcoming show riffing on the movie of the same name and the other that does something very different with the Incredible Hulk and looks like a whole lot of fun.

For more mature readers who enjoy a little blood, guts, sex and whatever else they can get away with on the printed page, there’s the zombie series FUBAR by Alterna Press. Also, from Avatar Press, we have the dark side of super-heroics with Absolution: the Beginning.

So there you go. With this just being a tip of the iceberg of what will be available you have absolutely no excuse to be sat at home come May 4th as not only can you grab some great comix loot but most participating comic shops will be having in house competitions, fancy dress and other types of giveaways.

Whew! And I got through the whole article without using the words nerd and geek or even ‘pow’ and ‘za... oh damn!