Eyes On The Box//Doctor Who Series 7, Episode 14: The Name of the Doctor

The story: The Doctor has a secret he will take to his grave. And it is discovered. 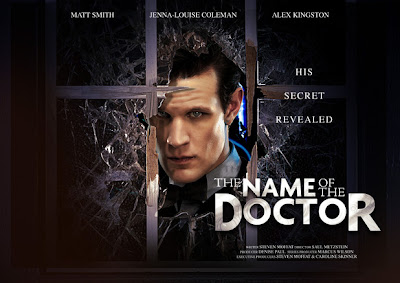 Series 7, part 2 of Doctor Who has had its ups and downs. From the sublime The Crimson Horror to the beautifully shot, but slightly underwhelming Rings of Akhaten, it hasn’t always felt like the heart-stopping build up to this year’s 50th Anniversary celebrations it possibly should have been. But with The Name of the Doctor current show-runner Steven Moffat brings us an episode that’s not only brilliant, it’s a total game-changer.

A week before the episode aired, the BBC in America sent out a bunch of pre-ordered Series 7 DVDs that included this episode. The internet was abuzz with some people gleefully revealing the ending and the rest trying desperately to avoid it. I was in the latter camp. And I’m so glad I was. But more of that ending later.

The Name of the Doctor and the tagline about his biggest secret was one to draw you in, but ultimately, in a show called Doctor Who, that question was never going to be answered. The question that was answered was rather more literal as we learned that “it is discovered” is the Doctor’s actual grave.  A disintegrating TARDIS, where all the ‘bigger on the inside’ stuff has leaked out to make it a giant monolith on the planet of Trenzalore, is the Doctor’s final resting place. And a fitting and striking one it is too.

With his friends, Madame Vastra, Jenny and Strax, having been kidnapped by the Great Intelligence masquerading in Richard E Grant’s body, aided by the creepy new aliens, The Whisper Men, The Doctor sets out with Clara to do the thing he should never do; cross his own time stream and discover the place he is buried.

Against this background, the tone of the story is rather fittingly funereal. Richard E Grant proves his acting chops in a dark and dangerous fashion showing us the alternative view of the Doctor as the Destroyer of Worlds. The Great Intelligence needs the name of the Doctor to open the tomb-TARDIS so that he can enter the Doctor’s time stream and destroy him in all points in time at once.

As the Doctor is about to say his name out loud in order to save his friends, he’s saved the trouble by a holographic River Song (the totally wonderful Alex Kingston) who does it for him off-screen. This River is the version that the tenth Doctor (David Tennant) had saved as a data ghost in a computer in the biggest library in the Universe, having died to save the Doctor.

Kingston here delivers a much more low-key Professor Song than the usually feisty, wise-cracking, gun-toting space archaeologist we’re used to seeing, and her delivery of the heartbreaking line, “Goodbye sweetie,” as she leaves the Doctor left a distinct lump in this reviewer’s throat. River Song is surely one of Doctor Who’s greatest characters and we must…MUST, I say…see her again.

Moffat adds some seriously fan-thrilling moments to this episode, starting with one of the best pre-credits sequences in the show’s history as we see different versions of Clara, the impossible girl, saving the Doctor in his previous incarnations. We discover that it was Clara who told the Doctor to chose his TARDIS as he was about to run away from Gallifrey and we see the original TARDIS, before it got stuck in the iconic shape of a police box, hurtling through the time vortex.

There are also glimpses of the Doctor’s previous incarnations at the end of the episode as he seeks to rescue Clara from his own time stream. And this is where the show’s gob-dropping ending hits you smack between the eyes as a dark figure, another version of the Doctor, “the one who broke the promise…my secret” is revealed to be John bloody Hurt! Cue end credits.

It’s an ending that has set the interwebs a-thunder and leaves us with one of the longest six months ever as we wait for the 50th Anniversary special in November. If there was ever any doubt that the show is in good hands for the 50th, then The Name of the Doctor must surely have blown them all out of the water. So we now face an anniversary episode that features three Doctors: Matt Smith’s eleventh, David Tennant’s tenth, and John Hurt’s who-knows-who. It’s going to be a long, long summer.

Jaw on the floor moment: “Introducing John Hurt as The Doctor”

“Arrrgghhh” moment: “To be continued….November 23rd”

Best weep-into-your-hankie line: The Doctor to River “You’re always here to me and I always listen. And I always see you.” Sniff.

We need answers: Murderer Clarence de Marco in 1893. Who is he and how does he know so much about the Doctor?

The “I know I sound like a broken record, but I hope the BBC are listening” bit: Vastra, Jenny and Strax must be given their own spin-off show.

Fan pleasing moments: The sight and sounds of Doctors past.