Have you ever mixed a completely random cocktail – either as an adult or a child? Did it consist of random elements of whatever you had to hand at the time, mixed to perfection by your curious hands? Japanese band Polysics describes their music as “technicolor pogo punk” and it’s hard not to picture the band pogoing around in a technicolor landscape to this completely absorbing but perfectly silly music. 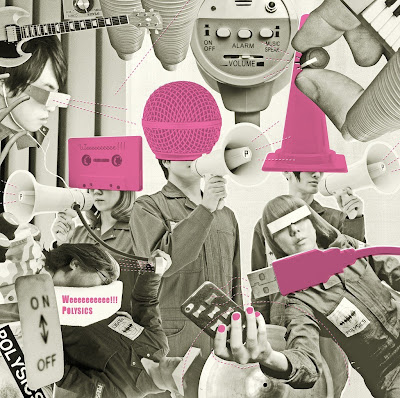 With a fifteen year career behind them it’s clear that they’ve become experts at this kind of thing and it shows in the effortless grooves they carve out using their trademark videogame melodies and rock effects. It’s like an electro-disco night out in Akihabara only much cooler than anything electric town can offer. There is doubtless an element of the oft seen geek chic element prevalent in Japanese culture and that is no bad thing when you consider just what it’s spawned in the minds of millions who count themselves as part of that club.

Yet this is not just a video game soundtrack (something very popular in Japan) this is music for those with a very open mind. There’s a freshness you’re unlikely to find anywhere else on these shores to this music and this is just why any scepticism is washed away after the first listen. Indeed, if you’ve ever been to Tokyo you can just picture those bright city lights as you listen!

There is much to enjoy, from the album highlight Everybody Say No to the infectious Lucky Star (not a Madonna cover – although that would be interesting to hear!) and it’s fair to say that if you don’t have any reaction to the music contained on ‘Weeeeeeeeee!!!’ that you possibly have no soul . After all, the listening experience here is akin to discovering a great new toy as a child and exploring just how many types of games you can play with it.

From the out of control plinky-plonky grooves of the title track to the perfectly nonsensical song titles that draw you instantly (‘Ice, Tights, Mike’, ‘Kitchen Ban Ban’ and ‘Quiet Smith’ anyone?) its musical experience the like of which is rarely found. You’re almost invited not to take it seriously and that is something unique in an industry that is getting ever more serious. Put it this way, if you’re looking for serious statements of intent here, you’re not getting any – but you are getting a seriously good listening experience bound to put a great big smile on your face even bigger than the Cat Bus in Studio Ghibli’s Totoro!