The Comix Column #3: The Comics You Really Should Be Reading!

DISCLAIMER: The below opinions are not facts but simply very one sided, biased views from a cynical and seen it all aging comics fan whose really trying to look on the bright sides of things. That the opinions expressed below happen to be true as well is merely coincidental. 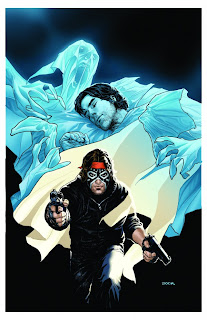 So, this week has been a real mix in quality. If you want to jump in as a series gets going I suggest you pick up the first issue of DREAM THIEF (not to be confused with The Dream Merchant also out this week). It’s the beginning of a brand new character so there’s no back story or previous continuity you have to worry about, all you need to know is in the book. The comic’s main protagonist –Loser John Lincoln- steals an aboriginal mask from a museum and becomes possessed by vengeful spirits as he sleeps; so begins this four part miniseries fro Dark Horse Comics. The concept is certainly an intriguing one and the first issue ticks all the boxes: it introduces something new, sets up the character so we understand who he is without any exposition and leaves you wanting to pick up the next issue. Good stuff.

I mentioned last week that I am loving the two core Avengers books from Marvel- Avengers and Uncanny Avengers- for their inventive and outrageous cosmic ideas and full on superheroics. But since the movie ‘Avengers Assemble’, Marvel is really trying to capitalise on its success and push the Avengers brand. However this has led to a flood of Avengers-centric titles of dubious quality and AVENGERS: THE ENEMY WITHIN #1 is no exception. This title is basically Kelly McCormick’s reinvented Captain Marvel title but with the Avengers shoe horned in unnecessarily, just because the characters sell well. It’s a shame because McCormick is usually a good writer and her Captain Marvel book is a worthwhile read but this comic hasn’t any real reason to exist other than to make money. Oh dear.

For those who enjoy their comics digitally and want a straight to the point, no frills superhero comic look no further than ADVENTURES OF SUPERMAN #3. As mentioned above with the Avengers, the Superman franchise spawns many titles however what make this particular book stand out is it is unencumbered from continuity, crossovers or continuing story arcs,  so the stories can be enjoyed as they are. The emphasis is on fun- refreshing in today’s comics market as most comic books promote death and destruction as plot points- and its always great to see Superman’s defected opposite ‘Bizarro’ in action. Lovely.

That’s the comic book present but how about the past? Well I’m glad you asked....
When it comes to comic book classics there are lists of the same old, same old that are bandied about: Watchmen, Dark Knight Returns, Maus, Cerebus, The Killing Joke and so on. So instead I’m going to try and point you in the direction of those graphic novels that are underrated, obscure or just unjustly forgotten amongst the hubbub of critics falling over themselves to award Watchmen that of ‘greatest thing ever’ when there’s so many comics out there ready for your love. 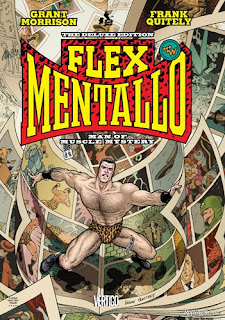 FLEX MENTALLO- A wild and wonderful adventure that’s a metaphorical psychedelic acid trip on paper. Grant Morrison and Frank Quitely’s story is a superhero comic that’s also a commentary on superhero comics; how they are at once pure escapism but can also talk about the big questions in life, tell us about the nature of reality and how we perceive it. Flex is one of my personal favourites and requires several readings to enjoy all its complexities as well as enjoying its all encompassing heartfelt purpose of it being a true love letter to the fantastic concept of ‘the superhero.’ Also check out ALL STAR SUPERMAN from the same team. It is a definitive celebration about all that is great about the Man of Steel and why he’s still the number one superhero.

DOCTOR 13: ARCHITECTURE AND MORALITY- Similar to Flex in theme and content as Azzarello plays with certain expectations of superheroes and comic books and comments on continuity and the nature of universe building in comics. As in Morrison’s Animal Man there is a metatextual twist to the execution and I’ll leave it at that for fear of spoiling the story. Also look for SPACEMAN by Azzarello. 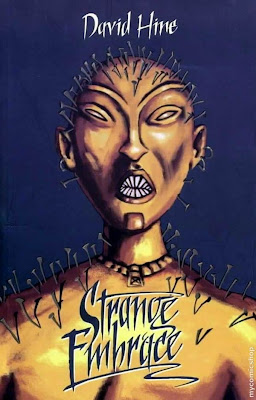 STRANGE EMBRACE- Scary is hard to do no matter what the medium is but David Hine really nails it here. The themes of childhood fears, obsession and memory allow for the black and white illustrations (there is a colourised version available too) to really get under your skin but hopefully won’t give you too many sleepless nights. Also find BULLETPROOF COFFIN for Hine’s otherworldly creepiness, this time shone through the prism of old fashioned superheroes.

PLANETARY- They are archaeologists of the unknown, investigators into the secret history of Earth and beyond. Warren Ellis and John Cassady’s epic runs to four volumes (in collected editions) so its cheating a little to include it here but volume one (ALL OVER THE WORLD AND OTHER STORIES) can be read in isolation as a one off single book. The stories introduce the three heroes and have an underlining theme and storyline yet can be read as individual tales. Ellis is extremely prolific but I think this is his most original work. Also ties in nicely with Ellis’ THE AUTHORITY.

Gilbert Shelton’s FABULOUS FURRY FREAK BROTHERS: THE IDIOT’S ABROAD- If you like your comics... well... comic then this is for you. Funny ha-ha AND funny peculiar dope smoking dopes Fat Freddy, Freewheelin’ Frankilyn and Phineas Phreak have been getting into outrageous misadventures since 1968 and the graphic novel ‘The Idiots Abroad’ exemplifies this best. Also read from the same creator: FAT FREDDY’S CAT.

There looks to be a little more variety next week with Waid’s DAREDEVIL hopefully ready to wow readers and critics alike again, the cool and knowing Young Avengers continues to carve out a specific niche in the Marvel Universe and  the aforementioned AVENGERS continues its assault on the senses. The fantastic BATMAN INC decimates all in its way as it continues to its conclusion and there’s NOWHERE MEN from Image that still has me going back for more..

Also next week I’ll be rounding up the best of web and digital comics as the internet is a black hole you can easily get lost in, never to be found (argggh!), so I’ll draw up a map of the territory and signpost you in the right direction to the most creative and entertaining comics you can read on a flat screen. Until then: ciao and happy reading.

The Comix Column is written by Martin Shepley.