Black Pudding is a collaborative album from Mark Lanegan and Duke Garwood and it’s quite frankly something to savour, as the infamous hot sauce label says ‘one f—kin drop at a time’. Listening to the album initially you can’t fail but be inspired in to a reminiscence of darker times with the dark guitar based soundscape from Duke Garwood. 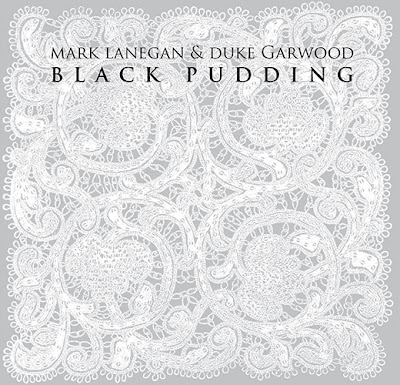 These are atmospheric tributes to the shadowy regions of life, a dark country vibe characterising them and a film score like intensity bringing an epic quality to the album. There are moments when you want to bang the table in front of you in serious sonic agreement and vast swathes of dark beauty like an oil painting melted by the sun.

On tracks such as Last Rung, the brooding piano strokes are an atmospheric companion to the resonant voice that accompanies it. It’s hard to see this album as merely a collection of songs - but sonic paintings that tell a dark tale, unflinching in the portrayal of the conditions that its characters reside. There are songs such as the impressive Mescalito, with its subtle whiskey jar guitar sound, that recall the grim realisation of Western movies and it’s in this grim darkness the album resides firmly. Talk of troubled waters and holy blood abounds and the cracks of sunlight serve as a danger, one more temptation to stop and look around.

One of the albums highlights is the Shade of the Sun, on which Lanegan sings of looking for better days whilst a mournful string section and bass rack up the tension with a dramatic ease worthy of the greats. Music such as this defies you to listen to its melodic drama but in it’s almost sun tinged melancholia there’s a tense beauty to the proceedings – one that tells a story you want to hear no matter what may occur.

The key elements of the album are the always luxurious, character full vocals of Lanegan and the slide guitar from the excellent Duke Garwood and whilst it’s easy to sat an album is excellent, I can confidently say this will be in my mind for many more listens than most!