Modern Art Isn’t Rubbish And I Can Prove It: Liverpool Art Prize 2013

1) THE SPACE IS SPARSE yet decorative, cold yet inviting, post modern and archaic allowing historical advancements in art to take place while hollering back to a continuously reinvented past.

Four artists. Four works of art. Like the directive children’s novels of the eighties, you choose your own adventure- in which order shall I VISIT the work, as I am not going to LIVE with these ideas but merely ‘touch base’ with them; to see Modern Art (M.A.) of the moment and then move on (well that’s the plan anyway). Physical minimalism sits beside aesthetic complexity allowing each piece to change its context as they are all showcased together. But we must judge them on their own merits and allow them to communicate singularly and alone. Alone. Alone. Always alone.

Now in its fourth year the Liverpool Art Prize sits lazily upon the Liverpool Docks, lazily because like Mohammed to the mountain, the flock to the shepherd, the students to the teacher, we must travel to the gallery, an activity unheard of in a forever connected yet continuously hermetic interweb wide world; it’s a global village but someone forgot to tell the art world. You can download a novel to read on the bus in bite sized chunks or stream the latest movies to your i-KindleBerry, everything coming at you as quick as the thought you had about it. Everything except art. Well, love and art.  And to have a love for art you have to have patience to be rewarded. In the Grand Hall (not very big and like no Hall I’ve ever seen) next to a cafe called ‘What’s Cooking?’ (again, post modern irony or do they really not know?) the exhibit awaits....

At first we enter, Laurence Payot’s piece literally looms large. A billboard of public spontaneity, we see her working with the process of (re)capturing the moment, (re)creating the everyday; like an unseen deity wielding the power of a well organised puppet master- but surely this must be real, as there are too many unaware pawns to be moved around on this public chess board? As we look closer at the image- and this is why it is magnified so- we see every ‘performer’ has found a place and are ‘acting’ accordingly.

But of course this is simply everyday life writ large and any intent by the seen is from the subconscious mind of the seer. The macro is reflected back into to a microcosm of bustling life but Payot’s eye wants you to see so much more. Payot is known for her interactions and interventions in public spaces (recalling the Situationist Movement of fifties France) and as it is the people as the medium this piece shows even the most subtle or nuanced interaction i.e. observation, can function as a catalyst that sets of events that would not have happened otherwise (for example the fact this moment can be kept for posterity is only because it was captured, if it hadn’t it would be gone forever.)

Because (the) exhibition(s) is (are) transient and there is nothing more than needs to be said than what the artists need to say, the echoing hall instils confidence as the undressy minimalist decor does nothing other than enhance the pieces and lets them speak for themselves. The make shift and finite nature of the exhibition is for all to see as, when Sunday comes, nothing will be removed except for four works of art.

The interest in exhibited art- as opposed to bought, seen in magazines/ on websites, relayed in conversation-is about the experiential drowning out the experimental. Others thoughts hum too loudly from their heads and opinions come brusquely of their tongues, art is not about others but about YOU. And maybe that’s too much for some to handle.

Visiting an exhibition for the first time reminds me why I love art; regardless of what the quality will be, I don’t know what to expect. And when I say I love art I mean I am devoted to it, like a martyr to a religious movement or a zealot to a politics. Why? Because Art is about living and it is all we have.

2) POST MODERNISM (PO- MO) SEEMS TO BE ABOUT LOSING THE COMPLEXITY OF MODERNISM and being honest about what is being represented. Maybe that ladder is just a ladder? It is a  symbol of going nowhere, of sadness, sadness as it leans against a (one of the four) wall(s) with a roof above; therefore to climb it is to go nowhere, which is ironically as far from the modern artist’s mind as possible. For M.A. artists living in a post Po-Mo world art is about selling and the currency of art and as an investment and a talking point for the living room and so on and so forth when it should be about aesthetics, communication, perception, regression, progression, deception, life, love, sex and death. Well, basically, it should be about art. They have become business people, craftsmen and craftswomen, but almost never artists in the public’s eyes. However I’m here searching for artists and I realise it’s up to me to find them.

Kevin Hunt gives life to the moribund. And you can’t say fairer than that. For human hands to bring the dead back to life is to make us see an alternative to our own ‘way’ and how we can make changes to what is and to what isn’t. Hunt’s art is about rubbish but it doesn’t mean M.A. is rubbish. The ordinary has always laid outside the realm of art (both literally and metaphorical; art wants to be special even when it tries hard not to be) but here it screams to be heard and the act of ordinariness puts itself forward as important.

His interest lies in an invisible and arbitrarily drawn line between when an object stops being its supposedly obvious projected self and becomes worthy art. Is it about how it is placed, its direction and surroundings? How little sophistication can a sculpture get away with before its stops being ‘important’?  Is Hunt freeing up the objects’ to let them just be or is he caging them in creativity because of context. As I move away from Hunt’s Ladder I wonder how many of his own questions he has managed to answer.

Is it not the observer who in disdain to the observed automatically bypasses complexity and meaning with reactionary disgust? ‘Do not patronise me, do not preach and above all do not make me feel stupid’ and because they are made to feel something less than the comfortable immediacy of understanding- in this a fast track, fast food, T.V. on demand world- they refuse to participate in the artists ‘game’ and try and give it a redundancy by (over) reacting with: “modern art is rubbish” or “my five year old could do better” (I have noticed with amusement it has suddenly become “my three year old could do better”- they even want their possibly imaginary child in its hypothetical situation to be skilled younger.) 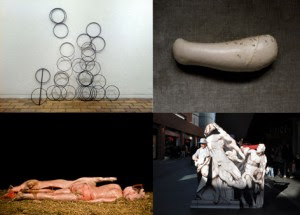 3) M.A. SHOULD BE THE HEART BEAT PUMPING AN EVER FLOWING  SUPPLY OF ENERGY INTO POPULAR CULTURE where all is (should be) new and challenging, but at times it can begin to look like pop culture informs the art and when it has reacted against what society has to offer- which is usually recycled from past generation because of obsessive nostalgia - all M.A. can be is self reflective: the mirror in the mirror; the depiction of an object within the same object; the design paradigm of  the matryoshka principle in action. It needs to forsake its principles for feelings.

Juliann O’Malley’s inspection of people is for their own good and we look like we are in safe hands. Using her own body as a tool to elaborate on this idea and record events, her performance/ installation piece ‘Open Heart Surgery’ plays on the juxtaposition of the use of the metaphorical heart and the literal. As we hear a surgeon perform surgery we watch O’Malley lie bed bound, a bloody heart upon her as kitchen knives swing above. A performance has never been so in the moment, raw and contained; on headphones positioned around the darkened room twenty women speak of the many ways you can have your heart broken. The circling audience isn’t shocked but startled by the performance, what they are shocked by is how much they enjoy the thrill of the details and how that challenges them. They soon become introverted going back into the deep, dark recesses of the mind to ask the question: when was the last time I had my heart broken? I am still putting my answer(s) into a list later that night.

4) A THEMATIC LINE IS BEGINNING TO BE DRAWN through all four works, pulled tight and tied up. It is more than I thought would happen as the pieces of work surrender to each other and seem to become one gestalt of modernity, proving that there is something new under the sun and that it can burn brightly. The art pieces having a connection to each other in intent and declaration is more important to me than I first realised, as a strange feeling begins to wash over me. At first I don’t recognise what it is and then realise: I am looking for a point and I may have found it.

To some textiles and craft may seem uncomfortable bedfellows with ART (with a huge capital A) but art is everywhere, in everything and is of everything; as well as the fine stitches that holds it all together. Tabitha Moses has lovingly created surrogate children to care for, turning the conceptual into the emotional. There is not so much ideas and themes put forward here but stomach punches from Moses’ diary of feelings: a lack of children of her own, toying with ideas of IVF and adoption- children have forever been elusive to Moses but she has made this into a call out, a shout out, a one sided dialogue telling us what she wants and we have to listen. And there is no anger, self pity or regret as it simple what she is doing, it is an idea as old as time from myth, fairy tale and part of the very sustenance that keeps us moving forward; she is making a wish.

In my head the word ‘Care’ continues to repeat itself like the beat of a drum, and it is a sound neither scary or annoying but soothing and it’s taking away any anxiety I had about the state of M.A. Laurence Payot cares about the human race’s future, Kevin Hunt cares for the soul and reputation of lost objects, Julianne O’Malley cares about people’s feelings and Tabitha Moses cares for her hand made children. The facetiousness and empty celebrity of Pop Art is gone, the explicit shock tactics and anger of the YBA’s is behind us and instead Nu-Po-Mo gives us art that we don’t just want to visit but we COULD live with, even taking it around to see mother on Sunday for Lunch without any embarrassment. Care is no longer a four letter word and neither is Art. And that’s why Modern Art isn’t rubbish.

Epilogue- RE: And the Winner Was...

On the 30th of May Tabitha Moses was awarded the Liverpool Art Prize by Metal Gallery (who run the awards). She also won the People’s Choice Award- so a double victory- and she seemed more surprised than anyone else in the room. She probably seemed so shocked because she didn’t realise sometimes you do get what you wish for. And I for one couldn’t be happier.

If you are one of the people who do care about Modern Art then visit the exhibition before it finishes on the 8th of June.