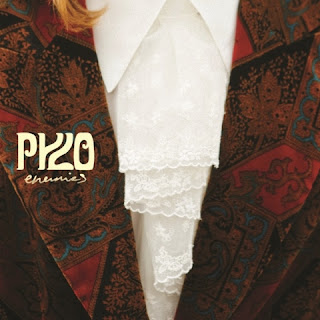 The 'spiritual forebears' bit is important; 'Enemies' sounds like a progression from the musical landscape of 'X & Y', arguably the point at which Chris Martin & Co.'s sound reached maturity. Singer Matt Aldus doesn't sound in mortal fear of voiding his own bladder, which helps give the song some real heft, and the stuttering drums which appear in the second verse offer a pleasing counterpoint to the four-to-the-floor pounding which predominates on the rest of the track. That's not to say everything works here; the “gang vocals” on the chorus are in dead-on, possibly-autotuned unison, Still, Pylo are a young lot – the members are still in their early twenties and the band barely a year old – so there's still time and space for them to develop.


What's obvious is that Pylo aspire to be the latest heroes of a particular strain of stadium rock, and are aware of the lineage of their music. Apart from Coldplay, there's elements of Radiohead, U2, the National, Doves and even Pink Floyd in there – all artists who combined everyman emotions with massive success. Pylo blatantly have the same goal for their music – not only does their press release talk about “bringing balance to the airwaves”, it also includes the phrase “next stop... Hyde Park” - and on this showing they have the potential to meet it.