Ooh. This looks interesting we said as we opened up this latest e-mail to arrive in our ever flowing inbox. The e-mail in question directed us to this album by Estonia's Talbot – the dark and brooding “Scaled”. 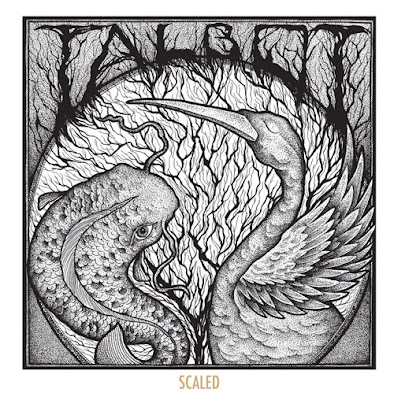 We’ve been party to the listening of Hardcore on previous occasions and often found a great need to take a break after a few tracks to crawl back into the daylight with a milky brew – but Talbot’s album didn’t create grey skies in our coastal blue – not instantly at least. It has a gradual build up of tension, each track racking up the bleak industrial wasteland image in the mind a bit more than the next.

The fact the tracks are generally long, from 8 to 12 minutes long, is a blessing in that you can get stuck in the music with ease. Many a Hardcore album will thrash out its journey with a rasp and ultra-speedy riff but in the case of “Scaled” we have a slow burning sound that develops over the six tracks into something that is beyond the usual misery fest that such music can indulge in.

There’s an artful touch to the soundscapes the band present and even the twelve minute Shadowbird doesn’t get flicked forward. The malevolent raspy vocals that plague Hardcore records are used with measure throughout the songs and for that we appreciate them more – not that they’re meant to be beautiful in their composition we’d say!  The joy of albums like this is that they are unrelentingly the opposite of joyful in their sentiments and thus the hardcore modus operandi is fully kept in place here despite the lighter touches evident in the production.

Highlights include the short and sweet Gothic lullaby Scaled and the track where all the tension and energy comes together for a final assault on the nerves Hallelucinogen – as good a closing statement as any in our books! If you’re into the harder brands of music then you’ll enjoy this but equally, if you can stand a bit of raspy voiced gothic minimalism in your music you’ll be equally at home!