Teardrop Factory are an indie band. They might not like that term, because for the past decade it's been mangled and abused to the point where it can be applied to Scouting For Girls and people kind of see the point. There are many epithets for that kind of empty-eyed, chart-bothering guitar music, but none quite sums up its desperate desire for lowest-common-denominator street-cred like 'Topshop indie'. 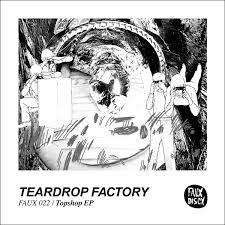 Teardrop Factory are a different kind of indie band; not for them the coveted playlist slot in the mens section of Warrington H&M. This is the kind of band who identify themselves only by their first names and have a website that looks like a fanzine you'd find on a stall at Indietracks. Actually, they're the kind of band that'd probably play Indietracks. Unkind writers might caricature the Brighton three-piece going to sleep at night clutching their copies of Psychocandy on vinyl beneath the sheets.

Suffice to say, then, that the closest their debut 'Topshop' EP is getting to its namesake store is name recognition. This record's influences are rooted in the half-decade before Britpop, with woozy, half-audible vocals drifting across a wash of distortion and reverb. Instruments constantly stray into each others' frequency ranges, battling for dominance in the mix. It's messy, confusing and exhilarating; it'd probably make Johnny Borrell jump right out of those awful white jeans everyone remembers him for.

Opener 'Better Company' is a promising start, all Buzzcocks-meets-Galaxie 500 sham-glam with cymbals everywhere; it's also oddly low key in places, but when the guitars kick out after the second chorus it unleashes some properly scuzzy euphoria. It's hard to tell what the lyrics are, let alone what they mean, but here and on the rest of this record that doesn't detract from the song; as with bands like My Bloody Valentine, it's less about what the singers say, and more how they sound that makes them special.

'Vanity Unfair' is awash in male-female unison vocals, a charming fragmented melody that floats across a choppy, crunchy instrumental. Swapping between major and minor tracks may be an old trick, but it's still effective here; between two moody minor-key songs, this major key number gives the record a lift without otherwise being too different to its neighbours. Follow-up 'Stolen Skull' is a belter, with a fuzzed-up riff that straddles the gap between bass and guitar; of all the tracks here this has by far the most attitude.

Title track 'Topshop' closes the record with a real change of pace; a mid-tempo, more anthemic song with a sort of comedown vibe. From within the cathedrals of reverb you might just make out the line “This is my shirt/and I like what it says”, and for a split-second imagine the venom dripping onto the heads of the Pigeon Detectives; but then you're swept away by the colossal climactic riff and another wave of overdriven bliss.

Teardrop Factory may not be fashionable, but damn, do they have style.

'Topshop' EP is out now on Faux Discx.