First came the jumper – you must know it, THE jumper that hooked crime drama loving fashion scenesters onto Sofie Grabol’s unforgettable lead in The Killing. Then there was the room lamp – the only room lamp you’ll ever need in your residence invariably found in the background of shows such as Borgen and The Bridge. If you’re wondering to what end this paragraph is going – think London, a former warehouse and a festival celebrating all things Nordic Noir. 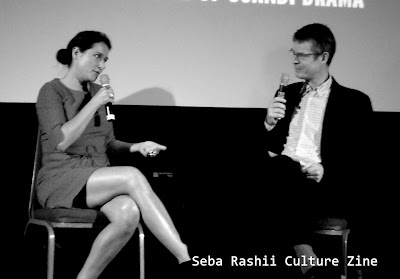 The magic combination of home decor, film and television screenings and Nordic Noir fun that was Nordicana bought much cheer to a somewhat Baltic day in central London. A festival dedicated to the burgeoning Nordic Noir genre was not the expected outcome of much love for one jumper and endless interior décor fantasies but by any standards it’s an acceptable one. A short distance from one of London’s oldest Tube stations, the somewhat packed Farringdon, in a building that resembled the beloved Statsminister’s work place in Borgen, was Nordicana with a plethora of film and television screenings, guests aplenty and lots of interior décor porn including some uber comfortable sofas on the upper floors with coffee handily right on hand.

The day began with a long queue of people outside the venue, all no doubt eager to get a ticket for the signing session with Sidse Babett Knudsen. After what seemed a rather long time it was time to open the gates and soon we were in, admiring the collection of goods for sale, including DVD’s aplenty and lots more Scandi related goods as well. But in the moment, we wanted coffee - Some nice Swedish coffee. That, and to catch the excellent talk from SBK to open the festival – and between the caffeine and said talk we were completely refreshed.

The space was packed, with barely an empty seat to be found and the projection showed us almost teasingly previous Radio Times covers of SBK herself, The Killing and The Bridge plus, ahem, Kenneth Branagh. When she did arrive the room filled with an applause that, the interviewer noted, would not likely be given any female politician in the UK. Topics ranged from (dis)similarities to The West Wing, the perception of the character in different territories, to the (as yet unseen in the UK) third series during which we were jokingly assured that “Phillip would be back and there would be four more children…”

When the questions came from the floor hands were shooting up like bean stalks as all manner of questions from the serious to the silly were fielded by the ever cool SBK. We have to admit to not usually enjoying this type of event but the non egotistical responses and warm response to each and every person won us over. And don’t ask us about meeting her afterwards for the signing session – that DVD will NEVER be opened. (Signing sessions are not usually our thing either by the way, but this one rocked.) 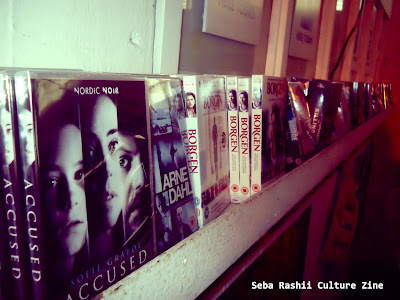 The day seemed to thin out a little after the main event’s Sidse fever but still the various film screenings enthralled and even a Baltic turn of rain and wind didn’t dampen the venues atmosphere. There were some music performances to capture the ears of the assembled crowd, most of them with one of the excellent dishes from the food stall that delighted many including ourselves. (The meatballs and mash was truly excellent!) The occasional Nordic Noir star was spotted taking in the scene and more than once were caught by fans for photos and chat - including a large number of Arne Dahl’s cast.

If that wasn’t enough there were shopping opportunities aplenty for those lamps that had so many completely forgetting the plot line from salivation, trips to Iceland, books from a whole number of authors including Arne Dahl himself, onesies inspired by The Killing, excellent jewelry that could inspire scenes of mass spending and much more.

The first festival in the UK celebrating Nordic Noir certainly got off to a good start. The venue, an abandoned former warehouse filled out with stalls and people was barely decorated and in that was a reflection of the ethos of nature in the dramas the festival celebrated. The simple can often be so much complicated than it looks on the outside and the love that went into the creation of this event certainly shows through. Should there be Nordicana 2014 – we will be there!

Words and images by Sebastian Gahan.