Warning! Contains spoilers from the start

The story this week: We learn that Julie was an early victim of killer Serge. Adèle gets close to Simon again and shows him their daughter, Chloe, and Camille decides she wants to stay. 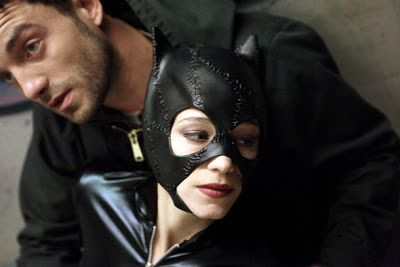 This week’s opening flashback shows a devastatingly sexy Julie of seven years ago dressed as Michelle Pfeiffer’s Catwoman. Crying off a flirtation with local cop Laure dressed as a diminutive Batman, Julie heads for the subway where she’s knifed by Serge in a prequel to his present day attack on Lucy.

While we quite quickly learn the cause of Julie’s scars, The Returned continues to raise more questions than it answers. How did Julie survive such a horrific attack? How did Lucy, for that matter?

“He ate her stomach”

While Julie tries to shut herself away with the mysterious child, Victor, her neighbour Miss Payet reveals herself to be a far more malicious creature than the nosy-neighbour we originally took her for. She revels in telling Julie about the attack on Lucy and then threatens to call social services to investigate Victor. It’s unsettling, therefore to see the dead body of Miss Payet being licked by her many cats in another homage to Batman Returns following a visit from Victor.

Which begs even more questions. Are we, the viewer, wrong to be relieved – even glad - at her demise? Will Miss Payet be back as one of the returned? If she was this unpleasant in life, what will she be like as an undead? And where did all those bloody cats come from?

While Julie’s troubles continue apace, so do those of Camille and her family. The family descend further into madness as they look desperately for a way to bring Camille back into their daily lives. Dad, Jérome wants to move away while getting back together with estranged wife Claire. Claire herself indulges Camille as she plays at being “cousin Alice” and dresses up as her now older twin, Léna.

And talking of Léna, what is the terrible scar on her back? Has is just appeared? And is it growing? She also seems to be showing more interest in the returned Simon than she does in her own sister, even paying a visit to Adéle to ask about him, leading Adéle to suspect he may not be a ghost after all, while denying knowing him.

Meanwhile, Adéle’s police chief fiancé Thomas reveals a less-than-caring side as he obsessively scours the town’s many, many CCTV cameras for images of Adéle and Simon. This man even has his own house rigged up with a plethora of cameras, leading him to witness Adéle and Simon’s kiss.

More questions are raised around World’s Weirdest Psychiatrist ™ Pierre as a cop turns Simon over to him, telling Pierre, “I have a lost sheep for you.” He seems to know more than anyone about the town’s returned dead. Is he something akin to Max in The Lost Boys? Is he a finder of lost souls? Or is he a damn fool who’s setting himself up for a whole world of trouble?

We can only see if these questions are answered, or whether they raise even more as next week’s episode sees Julie no longer able to keep Victor a secret; Camille’s ‘Alice’ alter-ego is a success while sister Léna’s scar continues to grow, and Adéle and Simon get even closer.

Quote of the Week: “Batman doesn’t have any super powers. He’s just loaded and has a lot of gadgets.”
Shudder of the Week: “They call her The Appetiser”

Black Joke of the Week: Camille to dad Jérome, “Can I have a fag? What…you think I’ll get cancer?”
Re-wind and re-wind again: Who attacked Julie in the lobby? Was it a flashback? Was it Serge? Is Victor Serge? Was she hallucinating it all?

What the actual…?: What the hell was the dead thing in Claire’s bin covered in flies?
Take That fan question: Does Victor remind anyone else of a young Robbie Williams?