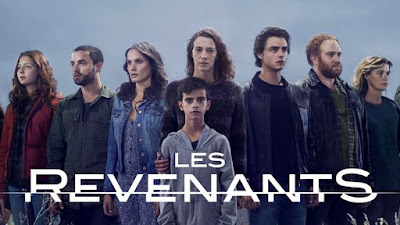 It’s not every TV programme that would make you feel great pity and fear for a serial killer, but then The Returned is not like other TV programmes. This episode may be called Morgane for one of the new Revenants, but be in no doubt, it is all about Serge and Toni’s returned monster of a father, Milan.

Serge, who was a sick and twisted killer and disemboweler of women in life, has built a fragile connection with Lena; his humanity now seemingly re-asserting itself in death. But more of that later.

We wondered whether former barmaid, now leader of the undead, Lucy, was a Revenant herself. Now we know that she is, but questions remain around why she was killed. We knew last week that she was terrified of the newly returned Milan, but not why.  In a stunning pre-credits sequence we see Lucy and her lover Morgane 35 years earlier caught in a storm so severe that it breaches the reservoir and floods the town.

While the town’s survivors watch the waters overwhelm their homes, Milan orders Lucy to follow him and subsequently murders her, throwing her body in the dank cellar of a bar.
Why does Lucy follow Milan so docilely? What is her connection to him? And with Serge and Toni?

Not so docile, but as easily defeated by Milan, is his son Serge. Ordered by Milan to take Lena into the woods to kill her, Serge tries in vain to thwart his father, who has convinced Serge to comply by cracking his hand in a vice. In a modern, bleak, Alpine take on Red Riding Hood, Serge leads Lucy through the woods on his father’s orders.

And this is where our pity and fear come into play. What would it it do to a small boy to grow up with a father so brutal and grotesque? Whose every act appalls? Would it twist a young child’s mind to the point that he grew up to murder young women and eat their insides? The pity for the child who became a killer is palpable. And the fear for the killer whose humanity has returned as he has from the dead is genuine.

Away from Serge and Milan, there’s so much happening that it’s hard to believe that we’re only on the third episode of this series of The Returned. As soon as we have a revelation of some seemingly important piece of information (the Revenants are in different states of liveliness depending on whether someone wanted them back or not), we’re left with more questions than answers.

We discover that the bodies seen hanging from the trees last week were indeed those of the Gendarmes and that they did die at the end of series one. But why were they hung after being shot? To stop them from returning perhaps? And who is the one that is missing?

Back over in the Deadsville part of town, where the Returned have taken up residence, poor old Julie, who given up her whole life to care for the strange, sinister child Victor/Louis is left broken as she is no longer needed now that Victor’s maman and his brother are back from the dead, too. Victor’s parting gift to Julie is his revelation that she had been pregnant when she was almost killed by Serge and that the child is better dead than alive with Julie as a mother. Even the wonderfully cold and prosaic Mrs Costa urges Julie to go telling her “You have no place here.” The Deadsville zombie population allows Julie to leave and our last sight of her is as she wades into the cold waters of the lake. What does this mean? Is she planning to die? Or to return to the land of the living?

Also in Deadsville, Camille’s rejection of her mother Claire continues as Camille and her newly returned school chums search for answers from a mysterious young man who was born in 1957. He knows things that they don’t know, but is evasive in imparting too much knowledge about why they’ve come back. Who is this young man and what else does he know? Someone was waiting for him to return, but he won’t say who. Again, we have more questions than answers.

Adele, back from hospital with her new baby, has questions of her own as she struggles to deal with this child of her dead partner. How does her daughter Chloe know about the name Nathan and how does she know the song that Simon wrote for her before he died? The fear for both mother and child and what may become of them is almost unbearable. Just as Adele seems able to reach out to her baby, Simon appears. To take Nathan with him? We can only wait and see.

And finally there’s Berg and his team, examining the vast sinkhole from last week’s episode. What is down there in the murky depths? Was that a person we glimpsed on the underwater camera? Is this the source of those who come back from the dead? Yet more questions.

What is not in doubt is that this second series has not disappointed at all. Indeed, it continues apace with its own unique identity.