If you’ve ever been to a slam poetry event you’ll be used to words being thrown like weapons around a room. And the forty-five second intro to the PJP Band’s …And So It Goes throws words at the listener in a rapid-fire as the themes of the album are introduced with a refreshingly rowdy monologue that segues quickly into the album proper. 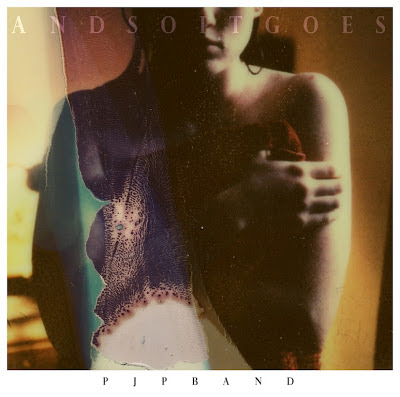 Being one whom often judges from the cover what the music could be like we were wrong on this occasion and we admit it. There’s a muted vibrancy to the music found on …And So It Goes and that’s a good thing as well as a bad thing. Whilst we expected a raucous melodic comeback to the promising opener it never quite comes, although that’s not to say that the music is lacking in the all important listening factor.

Perhaps we’re impatient for the chords to kick in, or maybe we’re just on a three minute pop song kick at the moment but it took a quiet moment for us to truly appreciate this music. In the semi-darkness of an evening with just ourselves, a beverage and an iPod we got sucked into the music and it was the fourth track Ole! We Ain’t Prey that pricked our ears up. The chorus takes stabs into the raw energy of the music and the oft-reference to blood being spilled make a nice visual reference for the listener in smooth juxtaposition to the semi-mellowed out instrumentation.

This is swiftly followed by our album highlight the instant listening joy of Vicious Luck. With straight ahead guitar and live drum beats pulling the song along melodically it gets in your brain easily, some sly keys leading into the semi punk–poet mid section. Over the while album though the true glue holding it together is the often poetic lyrics and the delivery of them – when the music behind hits full power you get a listening experience that fulfills the bands potential but on some tracks, notably early on in the mix, you sense that missing je ne sais quoi all too clearly.

Taken as a whole it’s good solid album, but with some minor – and we do mean minor – tweaks to song order it could be even more addictive.