Music Review// Lay It On The Line – 'Crowhurst'

Donald Crowhurst is one of those tragic figures that litter human history, his story a testament to our often ridiculous capacity for hope in the face of almost certain failure, and what the cruelty of existence can drive us to. A businessman and amateur sailor, Crowhurst entered the 1968 Golden Globe around-the-world yacht race in an attempt to save his failing business; hopelessly out of his depth, he abandoned the race early on and attempted to fabricate his results in the hope of finishing last and avoiding major scrutiny without losing face. Eventually, driven to the point of madness, he leapt off his boat, the Teignmouth Electron, and drowned in the Mid-Atlantic on July 1st 1969. 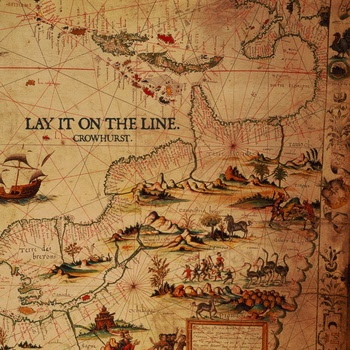 If you were to name an artist to set this great tragedy to music, you might think of the austere grandeur of Mogwai's post-rock or the Pet Shop Boys' electronica, or Laura Marling's troubled cross-genre folk. It's something of a surprise, then, to find South London hardcore band Lay It On The Line choosing to take on the tale for their new record. Can they do Donald Crowhurst's sad end justice?

The answer is, surprisingly, yes. From the first moments of opener '1968' – rumbling drums under a snippet of radio broadcast from the period – this is a record that juxtaposes moments of subtlety against traditional hardcore intensity. From the start, the music sounds paranoid and disturbed – a reflection of Crowhurst's eventual mental state when he jumped overboard, as though telling the story in flashback as the protagonist wrote his long, rambling suicide note.

The band have obviously done their homework on their subject matter. Almost every line illuminates a different aspect of the story, and even the songs titles add to the tale – 'Tetley', for example, references the competitor who destroyed his own boat in trying to beat Crowhurst's falsified sailing logs, the knowledge of (and guilt over) which may have hastened the latter's madness. The music is top notch – Matt Ash's guitar in particular spins furious and forlorn melodies that really serve to lift Mike Scott's visceral howl.

Hardcore's taste for brevity plays in the record's favour here; even with a four-minute closing track, the entire nine-track album lasts less than twenty minutes, and there is a sense that if it lasted any longer it would start to pall. As it is, it's a fine unconventional take on an unhappy yarn, and worth the attention of hardcore fans and more casual listeners alike.

'Crowhurst' is out now on Fire Engine Records
www.layitonthelinehc.com