Off The Cuff//A Lynchian Scene

A quick glance out of my window revels in a barren scene. A Lynchian-lit bus stop, occupied by a group of people who have only just begun their own crazy clown time by the sound of it, is surrounded by a sadly waving tree, a dust can and a rather depressing local council building. 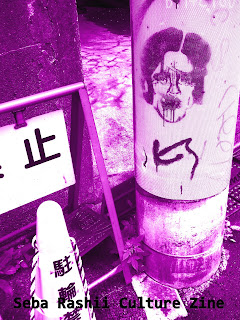 Just a few hours back the sun was cracking the flags with impunity and to all appearances the government had declared austerity on the wearing of clothing as well as just being alive.

Despite being somewhat of a closet Goth, preferring the cloth of darkness that comes in the colder months to the unseemly brightness of the summer months, sunlight doesn’t scare us per se. No, we love a little serotonin in our lives – but not the extent that many people who lounge on the beaches do. Good things in moderation we say – and that includes sunlight.

A little serotonin makes us happy to live on Earth and although said is invisible to the naked eye – the proliferation of bodies on show isn’t. We have no objection to naked bodies strewn around the place if it’s in an artful manner, with all possible aesthetic standards considered but when the view from your window is made worse by over tanned sprawlers something has to give.

So we decided to imagine it as a David Lynch movie.

If this was a Lynch movie there would be a masked stranger observing, raising his eyebrow, somehow visible behind the mask, in a way that implies something is going to happen. We’re not sure what – but something. Maybe there will be an explosion. Maybe the sun will go out, sucking the life from all present on the scene for an unknown force to harvest their lives for the better good. Maybe nothing will happen – it was all just a ruse to distract you from a bigger, more malevolent plan.

You really don’t know. When a stranger walks past you in the street you could be in the presence of a god or a demon. Perhaps there is no difference – and the world’s idea of Hell is all a lie. Maybe we’re reading too much into the darkness and just want to make a very quiet evening a little less so. But whatever the reason – it’s time for some coffee and a DVD. Something… Lynchian perhaps?