“Oh, please. You’ve got the rest of your life…”

The second series of Sherlock commenced, naturally, with the resolution to the previous season’s cliffhanger. And, in the ironic use of the Bee Gee’s Stayin’ Alive, ensured the chase between Benedict Cumberbatch’s acerbic Sherlock and Andrew Scott's Moriarty could continue to burn away in the background like a very fickle flame. 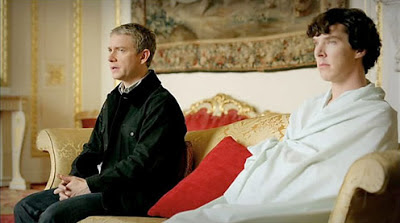 The montage of cases that Holmes deemed unappealing shows the depths of boredom that the great detective can reach and the power of blogging about said detective if you’re Watson. (Maybe we should install a counter on our lovely page? It may come in handy when our lives are in danger…) The deerstalker makes it’s first, very fleeting, appearance in the series as well, disdainfully viewed by Sherlock to boot.

“Tell us from the start. Don’t be boring…”

With Sherlock not leaving the ubiquitous 221B Baker Street for “anything more than a six” Watson is sent out with a laptop to stream the crime scene for analysis and, in the glorious way it does, the plot moves on with the entry into his apartment of the royal messengers sent to bring him to a certain place we’ve often stood outside of and looked for corgis.

Being nude in Buckingham Palace is surely on everyone’s bucket list (What? Seriously – it isn’t?!) and that fantasy is fulfilled in the first third of this episode. After being persuaded to put some clothes on, we soon find out the nature of said calling to the Palace. When this was first shown the appearance of “The Woman” aka Irene Adler caused some controversy, with dominatrix gear and lack of clothes to, ahem, boot. Quite why escapes us now as a simple search on the net (which we may or may not have done… ;) ) can draw up a lot worse than what is shown here.

But, as they say, reaction is everything and it clearly got the people talking. Chiefly, about the return of the show that we talk of now. A modern update of the Holmes character has now had two successful incarnations and for our money, the first is the most successful. The moment where Sherlock attempts to read the nude Adler and gets nothing from his deducing is one of the most effective in the episode and we’re already only barely halfway through.

The joy of Sherlock is the amount of plot and reference crammed into ninety minutes of pleasure it truly is and, if you haven’t seen this – which we seriously doubt – you’ll be pleased to know that there is much to enjoy and savour many more times than once. Yes, catch up services were surely designed for Sherlock – and whilst we’d love to discuss modern tech we can’t hang around as there’s a serious plot taxi to hail…

The subtext of Sherlock and Mycroft’s relationship, their strained conversations and bubbling under concern, is a nice step forward for the characters and all the cast get a look in – including the quiet but essential Molly, mocked by Sherlock at the Christmas gathering. The best moment though comes right at the end of the episode when Irene gets a helping hand in the form of Sherlock – proving that he really does get everywhere…

So on repeated viewing, how does A Scandal in Belgravia come out? The answer is very well indeed. The multi layered plot and performances from all the cast mean there is always something to enjoy and, being a confessed TV snob, that is saying a lot.