The writer and broadcaster Stuart Maconie, musing upon artistic criticism in his memoir Cider With Roadies, offered bands this piece of advice on dealing with criticism; “don't read your press, weigh it”. It'd be interesting to hear Eugene Hutz's opinion of such an attitude. If you've heard of Gogol Bordello or their frontman recently, it's less likely to do with the release of their sixth album than the lawsuit filed against Hutz by the group's guitarist Oren Kaplan, accusing him of various fiscal misadventures including “brazenly absconding” with $500,000 since taking over the group's finances. Were it not for the depressing severity of the accusations, it would be tempting to consider it another desperate attempt to drum up publicity; the timing certainly couldn't have been any worse (or better, if you subscribe to the soul-abradingly cynical viewpoint), breaking in the same week Pura Vida Conspiracy was released. 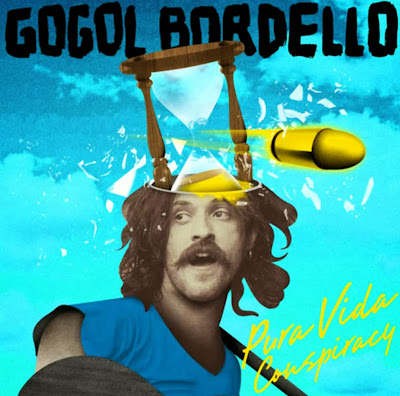 I'm expending so many words talking about this tawdry tale, not to avoid discussing the music, but to highlight the sadness at the heart of the matter: this album shouldn't be overshadowed by such a downright nasty issue.

Pura Vida Conspiracy has all the hallmarks of Gogol Bordello albums past; mutated gypsy-punk beats, a concoction of Balkan folk and American garage rock that is equal parts hackneyed and thrilling, the kind of nonsensical lyrics that will intrigue and infuriate in equal measure, and above all, a seemingly inexhaustible fountain of energy. If you weren't a fan of their earlier albums, PVC is unlikely to convince you otherwise; if you already liked their work, you won't come away disappointed.

Opener 'We Rise Again' is one of the strongest tracks on the album, with Hutz exclaiming “Whoo-pa!” every time the title rolls round, a circus-act call to arms built around a tumbling downwards chord progression. It wouldn't be true to say the energy level never drops from that point, but it is expertly managed – a track like 'Malandrino' showcases such skill perfectly, building from a loose, low-key prologue to a magnificent, mariachi-hued climax. There's a distinct tone of doom in these tracks, exemplified on 'Lost Innocent World', where Hutz proclaims “Lost innocent world/Lost innocent paradise/Where did you go?”.

Of course, Gogol Bordello just wouldn't be Gogol Bordello if they weren't doing things that occasionally challenged the patience of most listeners. The gypsy-ska of 'Rainbow' is a bit of a chore, and gives the album a hefty bit of drag, whilst on 'I Just Realized', Hutz's vocal tics go from eccentric to annoying (not helped by dafter than usual lyrics like “Is it because I am Russian/Is it because you are not?”).

Thankfully, the glorious 'Gypsy Auto Pilot' blasts away cobwebs and doubts alike in a burst of skirling violins and stomping beats, along with an excellent brief pastiche of Iron Maiden in the middle eight; if that weren't enough, following track 'Hieroglyph' is worth listening to for Hutz's pronunciation of the title, never mind its great melding of Levantine melodic patterns with their usual schtick. Indeed, the final third of the album is strong enough to make up for the weaker middle section and a somewhat limp final track, 'We Shall Sail' – perhaps the one point the album truly runs out of energy.

Pura Vida Conspiracy isn't a perfect album, but it's too good to be subsumed by tawdry legalities. It would be hoped that both sides would see that, and understand that; sadly, however, one side no longer has a horse in this particular race. Oren Kaplan does not play on the album.

'Pura Vida Conspiracy' is out now