The soundscape is a conceptual image. Its form can take any sonic direction but you know it’s a soundscape if you can picture a sonic city behind the sounds that form its whole. Perhaps by design the cover design for this E.P. features a trio of tri-colored speakers that resemble skyscrapers in their angular formation. 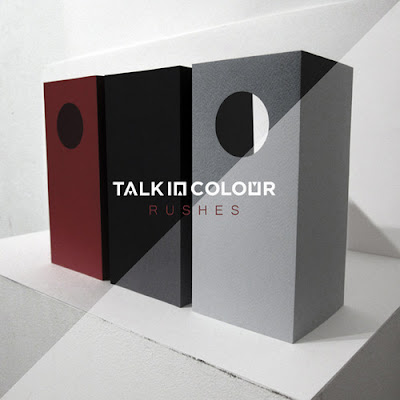 The music itself takes the form of backdrop that shifts and changes with the counter. There are spots of ambiance  drops of what was once known as folktronica and of course a vocal performance that captures the songs perfectly and catapults them straight into your zone.

There are just three songs on the E.P. and that’s just enough. Any longer and expectations could have gone the other way – the mystery is maintained perfectly over the well judged fourteen minute run time. You can listen without flicking the switch, feeling restless or even stopping to check anything but what that track is called so you can listen to it again.

Rolling is a perfect example of this with its dream pop tinged folktronica core catching your attention immediately. It’s blessed with an insistent heartbeat of a bass and drum line and captivates from beginning to end. It’s possibly the highlight of the release as well – although that’s not to say the remaining duo of tracks are any less listenable.

Indeed, they are equally as adventurous a musical journey. You can hear the London roots of the band in the music, the delicate yet often overpowering melodies evoking that sense of adventure in wandering the streets and embracing the ordered chaos that only London can afford to. With tracks such as Candles or Rolling as your companion you are most definitely good company whatever city you should find yourself. There are shades of a very European beauty co-existing with the soul darkening busyness of a huge Asian economic power and in that lays the power of Rushes.

Where ever you may go this music will surely soundtrack your journey perfectly – with even the most mundane trip gaining something intangible yet genuinely satisfying from its soundtrack.