There are many words have been used to describe the funk prowess of Janelle Monáe and after hearing the latest album from her concept series, The Electric Lady, there will doubtless be more. 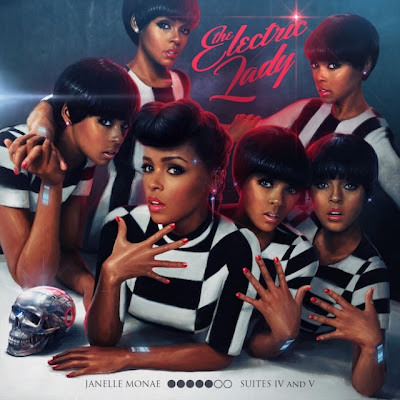 The first track proper features her spiritual forebear, the ever Purple genius Prince and if you were expecting horns getting down and funk grooves a la Tightrope then you’d be wrong – this is a laid back but tight groove that literally gives us what we love. Give Em What They Love certainly hits the right spots for an opener and by cleverly placing the Purple One first we’re listening out only for Monáe herself over the whole album.

Indeed, collaborations like that can threaten to overshadow a record but its following track is the super cool Q.U.E.E.N. featuring Erykah Badu – and if you’ve seen the video you’ll know that this is solid stuff. The funk is in place, the chorus gets the mind moving and twerking is strictly optional people! Music gold such as this needs some booty shaking but when you have a while album of it you need to save your energy.

The title track takes some Prince like synth and call out vox and even bands in another guest star in the form of Solange. It’s not as powerful as the sheer funk of Q.U.E.E.N. but it’s still a winner and that’s all good. The guest artists are mostly packed into the first quarter and that could be a mistake if we didn’t know that Janelle Monáe is a force of nature all by herself. The Electric Lady she may be but there is that very certain electricity coming from this music and that makes you step back and listen closer.

As the album moves on we get the soul tinged We Were Rock & Roll, the addictive Dance Apocalyptic, where the trademark character pieces continue as Monáe brings her alter ego Cindy Mayweather to the mic. We then end Suite IV with the smoky, almost classic Bond theme like Look Into My Eyes. If Suite IV were an album by itself it would be an excellent one – but there’s more as Suite V swings into the mix with a vintage jazz styled sound that oozes the class you know this record has.

With a lighter base than Suite IV we find the soul disco of Ghetto Woman, a song reminiscent of the timeless seventies soul dance classics that still get feet moving to this day. There’s an effortless flow to the music – crooning shifting into rap in less than one funky nanosecond and it’s genuinely exciting to listen to music that seeks to make you move more than just your mind! As the tracks flow on we get some slower numbers that show the true range of the artist. Just as engrossing when slowing the sound right down into a ballad as on Can’t Live Without Your Love, you really do realise why many label her as a near equal to Prince in terms of music quality.

Sally Ride again proves this with an electro blues sound that keeps the replay button in great business. Album closer What An Experience brings a melodic closure to the more mellow suite V and although it’s a given that you want more of the energetic funk experiences Monáe knows how to produce all too easily – you know that you’ve just listened to an album that takes the eclecticism of a very musical mind and channels it into a musical experience not to be bettered.

Is Janelle Monáe the new Prince? It’s difficult to say – especially as the man himself is still as active as ever – but she’s a very close contender!