With screenings guerrilla style all over the world and reports of less than happy security guards in the venues chosen it seems that the launch of Revolution of Love is going just as planned. Made in collaboration with Steven Klein, it draws on the themes of darkness and liberty touched upon during her recent MDNA tour. 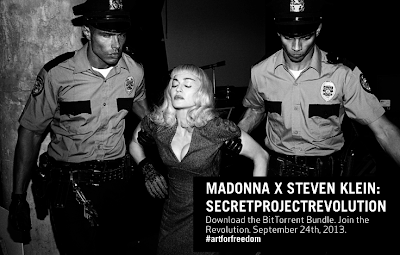 The film shows Madonna herself in an unidentified prison, a possible reference to Guantanamo Bay, thrown into a cell and beaten. Her voice over accompanies the monochrome footage with scenes of her wielding a gun and shooting members of her stage team before later recasting the traditionally destructive instrument as a reviving, life giving one when she wakes the previously shot drew with the same gesture. It’s a juxtaposition of the kind that makes you think – and whilst the message is expounded amply in the voice over the visual messages are even more explicit.

The traditional themes of Madonna’s music, truth, freedom and love are cast as visual metaphors to make a film that seeks to spread the word of love in all of its possible forms. With some recurring themes seen in the MDNA tour film we are taken into a world that mirrors the oft-hidden darkness of reality and shown it in all its ugliness.

Words have never been a problem for M and she lays it on the line in the film. She may have once been on an a mission to make you dance but this is darker territory and the message is clear. The world is falling apart with discrimination and persecution tearing cracks in society. The solution is even clearer - love is the way, as in all parts of life.

If other proponents of this message haven’t made the point enough already, then this film does so in the starkest of terms. The message is given is terms that all can understand – and who doesn’t understand love? With as many meanings and interpretations as those who give and feel it it’s ripe for exploration and this film does just that by showing the opposite.

We see Madonna surrounded by four uniformed prison guards towards the films conclusion; prostrate on the floor – as the lift descends away we hear a gunshot and are left in doubt as to the allusions being made. The world is turning into a prison camp, the guards are the politicians and they are all aiming their weapons be they political, human rights depriving or the gun toting type. Are we going to let ourselves be enslaved? The message it would seem to be is not.

Even if we’re in a country with a good standard of living and freedoms there is much to be learnt from this artfully directed and executed film. The obvious allusions are towards freedom of expression and gender abuse – witness the arrest and imprisonment of Pussy Riot in Russia or the persecution of women in the world as a whole. 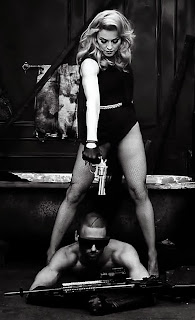 But what can we take from the film as a whole? The message is beyond reproach – in a society increasingly run by capitalism rather than human interest we’re seeing less love and more interest in the needs of stake holders. As the film confirms the true stake holders in life are us and freedom is something that is entirely relative to your situation.

Detractors may suggest that this is millionaire preaching her ideals on the world but in an absence of anybody else doing so – somebody has to take the initiative. Love, as the song has it, may be in the air but trying to find it is difficult for some. Art and politics have not intertwined convincingly for a very long time and with the Love Revolution we’re seeing a message that could just stick – but will the effects be seen soon? That remains to be seen… but there is still enough love in the world to keep us going for now for those lucky enough to have it, at least we think so…

Check out the film via BitTorrent from 24th September or at one of the guerrilla style screenings hitting the cities of the world in its launch week.