Music is always provocative and just how provocative it truly is, is one for only the listener to decide. When performance art crosses into the music zone you get a sub genre somewhat broadly challenged by many for its vague name of “Alternative”. 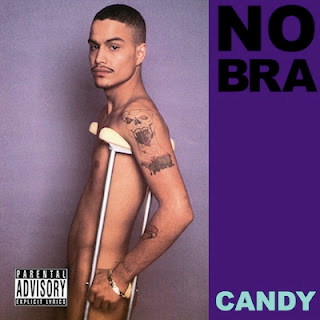 Candy, the second album from New York based performance artist Susanne Oberbeck aka No Bra is one such album. To merely listen to the album is to miss the point altogether. The live performance shows just what this music is all about. The mostly naked Oberbeck, her breasts barely covered by her long hair stands before her band and performs an androgynous mix of spoken word and punk poetry themed around the fringes of society where few dare to venture those that do never return from.

This is an album rooted in the deep physicality of the sexual fantasy and it shows in its provocative imagery at every turn. The cover art alone is eye catching in that lo-fi way punk records used to be – a naked man in profiles on crutches, the now traditional Parental Advisory warning logo barely covering the subject’s genetalia. It’s a cover to make you think and when you get to the listening you don’t doubt that this is no holds barred record.

Opener Minger takes an approach similar to the beginnings of punk. It’s Art house yet raw; properly defined rather than raucous. A bed of drums and fingered bass provides the base for a sexual murder ballad and it’s a listen that makes you curious. Once you’ve passed the first track you find Candy, with a melody that plays with disco beats and industrial loops perfectly.

‘What is your candy store?’ the song asks and the implication is obvious. Another sexual fantasy impressively pronounced in music. Date with The Devil makes a more rounded statement on society itself. Describing a meeting between the artist and the devil for a date, where she discovers he had lost his belief in the ultimate evil through selfishness. It’s an album highlight and the refrain is one that really brings some welcome philosophy to the record, mixed with the murky depths of its sexually based fantasy.

Constructor Work takes an industrial jazz sound for a song about picking up construction workers, It wonders aloud whether one can get arrested for coming onto a construction worker with some impressive lines such the smile rising ‘if I can fuck with biology why can’t I fuck you in the loo?’ and it feels less sleazy than it should and somewhat malevolent due to some excellent production techniques.

The artist’s somewhat androgynous image and vocals brings uniqueness to the music presented on Candy and you can’t help but get the songs into your head despite your subconscious protesting that you shouldn’t. Parallels could be drawn to the beat poetry of early Patti Smith, the malevolence of Aphex Twin and the sheer visual power of Iggy Pop and despite all that No Bra is utterly unique.

Oberbeck knows the power of controversy but for all the taboo topics and stance on display here there is at its heart a love of performance art and music that shines through.