Album Flashback #11: Hole - Pretty On The Inside

Almost twenty-three years ago, Hole unleashed their collective work upon the world who cared and started something that people have been arguing about ever since. That is, is Courtney Love, or even the band she formed - Hole, actually worthy of your enjoyment? 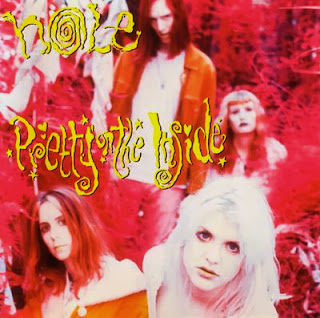 In all honesty, anybody who stands up to create and face the inevitable audiences who will aim their empty beer cans, trash and what-have-they at you is worthy in themselves to be considered some kind of artist and after all the bad words and tabloid journalism – the quality of the music still stands out.

Starting from the very beginning of the band’s catalog you begin with the explosively powerful Pretty On The Inside. If you’d listened to any of the follow up albums Live Through This, Celebrity Skin or Nobody's Daughter previously then a visit to this album would be a jarring experience indeed.

Some reviews from two decades back, surely the time it takes for reviews to be literature in themselves I think, have called it an album that you will either love or hate, and nothing in between. After many listens you tend to agree with said observation. The sheer force of energy it presents to you from the first note to the last is potentially off putting to the regular listener and an extremely fascinating and literate listen with that.

It is a loud, almost primeval offering that is sure to empty a dinner party of anyone but Grunge addicts and the open minded. The screams, growls and excellent lyrics written by Courtney Love herself are compelling to this writer and it’s easy to imagine that some will be raising an eyebrow as they read this now as a result of twenty years plus of past events from Love's somewhat hectic and surely one of a kind life cycle that has overtaken her artistry too much on occasion. But – some may argue that’s rock ‘n’ roll!

Pretty on the Inside is, though, the kind of album that most people will listen to only once, or even half way through because of its sheer noise levels, static soaked dirtiness and off kilter topics, but there is an undeniable beauty to the juxtapositions presented on this album. The music is angry, frustrated even, but there is plenty of real emotion in the lyrics and when one looks at the pink-tinted cover art you can see the Gothic element of the influence and a small concession to the fact that this album may be Pretty on the Inside, even if it's loud, aggressive, primeval, dark and somewhat of a difficult listen for the average listener. Art, some may say, is as such. Those that enjoy the album will supremely revel in its qualities, but those not keen on it will run a mile.

The influences on the album are diverse and those that I detect, are early Patti Smith in the poetic yet raw lyrics and delivery, the then burgeoning Grunge scene which this album is part of and more that could only be guessed at. The production from Sonic Youth's Kim Gordon and Don Fleming is impressive in its raw qualities and although this album is the only one like it in Hole's catalog, with Live Through This arguably much more accessible to the average listener.

It's a fact that every band starts somewhere and this is where Hole, and Courtney Love, really announced themselves to the world with such an energy that not noticing them was not an option.