Life can be just another form of pain on occasion – and in Hurricane Hill we see the initially separate struggles of four men under one perennial problem – war. 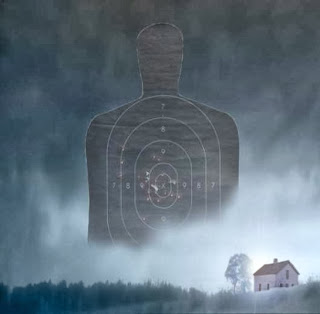 Opening with the thought provoking image of a pair of shoes on a table (unlucky for some, as a member of the audience noted) we soon hear footsteps out of the storm as Owen, soul resident of Hurricane Hill notes the arrival of the worst storm seen for a long while with an ambiguous 'so finally on your way then…'

So far so atmospheric but then we hear a loud crash and soon we see a seemingly unconscious Paul (at this point unknown to Owen even by name) dragged onto the stage. Were this on television the titles would surely kick in now and in that sense the opening mystery is excellently done. As they begin to talk, with Paul demanding ‘a Nescafe’ coffee rather than ‘that fancy filter stuff’ in a rare humorous moment  we start to get some ideas of just how he’s ended up at the highest occupied point of England although the real reason revealed towards the climax is still unexpected and still as poignant as the desperate statement from Paul that he’s “Lost…”

As you’d expect from a production concerned with such a heavy topic there is much to make you think. From the anti-war political protestations of Owen in his political position, tainted by a press revelation about his affair with a shoe sales man, to Paul’s guilt over shooting a father and son in Afghanistan there is much to think about after you’ve walked out of the doors and onto the street, which was as rainy and thunderous but thankfully not as violent as that which lay waste to Owen's home on the aptly named Hurricane Hill.

As with any trip to the Unity Theatre, this was an evening that was truly impressive. The performances from all four actors were pitched perfectly, never over the top even in moments of extreme emotional turmoil and whilst the portrayal of a Sergeant-Major is one that can easily fall apart in shards of pomposity the initially all swearing, all over the top macho performance never reveals a shade of falsehood. It was war, but underneath the swear words there was a genuine care for his men.

Whilst many of my visits to this venue are for performances of a similar vein and topic, Hurricane Hill certainly is one that will remain in my memory for weeks to come. Should you get a chance to see this play in any potential future performances, you should look forward to it immensely.