Minimalism is under rated. When David Bowie released The Next Day in early 2013 it was hailed as career high by many (and justifiably so) but one aspect that constantly came under fire was the cover art. By subverting the art of promotion with a surprise midnight release of first single ‘Where Are We Now?’ and no interviews Bowie proved just how complicated (but very necessary) music promotion often is with a sophisticated lack of said promotion. 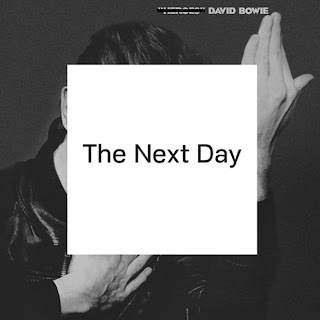 Of course, an artist with the pull of Bowie could easily get that promotion even without an avant-garde campaign. But the great thing about it is that he did it anyway. The success of the campaign for The Next Day and it’s expanded Extra edition later in the year proved that marketing is not always a dirty word with a beautifully minimalist campaign that took the concept of the album cover and played with it in ways that opened many eyes.

The cover of his “Heroes” album was covered at its centre with a plain white square, covering the artist’s image almost entirely. In its centre in an unassuming font is the album title – and it’s as simple as that. Sukita’s photography for said album is already iconic – and messing with it artfully is one way guaranteed to get a reaction from the listener. Soon after a sea of tributes in the form of profile photo’s and viral images on social media began to appear and you know that The Next Day’s cover art is truly art by that.

There have been other attempts to subvert the album cover – most notably Kanye West’s recent Yeezus which contains no jacket at all, with just the disc to marvel at - but with no less egomania, however fascinatingly entertaining it is. Although he’d probably refute the suggestion, Bowie is a music god – but the modest campaign behind The Next Day said ‘I’m back’ more than any interview could ever do. By taking full advantage of the digital revolution in the promotions sector and with barely a visual reference to him bar the obligatory music videos he showed us that anonymity on an grand scale can be pulled off –and very well. 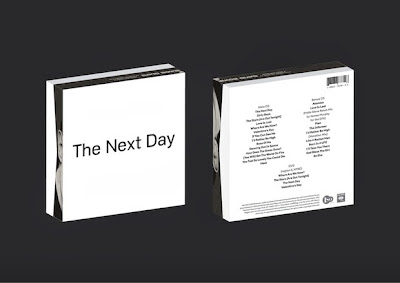 The Next Day is an album that rewards its listener’s decade long wait for it well – with a killer selection of songs and a sense of art that can’t be denied. The Next Day Extra exemplifies this perfectly – expanding on the white box theme by placing the contents in … a white faced box containing only the album title, As we open the package we find the three discs packed in well made sleeves named Tracks, Extra and Light all continuing the minimalist theme – with sections of the original Sukita shoot adorning their back. There is even a booklet encouraging the owner to create –a black book entitled simply ‘You’. This is a beautiful package that is so simple it’s almost far too clever.

The Next Day is music packaging like it should be – visually challenging, artfully designed and as timeless as it could be. Its designer Jonathan Barnbrook describes it as a visual representation of “forgetting or obliterating the past” but with albums like this there are and will be many interpretations.