Culture Focus//Doctor Who 50 - Essential Doctor Who (Part One)

As the countdown to the worldwide simulcast of the much anticipated anniversary special gets closer to its final call we take a look at some of the highlights of fifty years of storytelling. There may be controversy, head nodding or even Dalek mugs thrown in derision – but all we know is that this list is to our minds a good indication of why, despite some scratchy patches, Doctor Who is a phenomenon well worth recognising. We open with the debut of the creatures that still make an appearance in the show to this day… 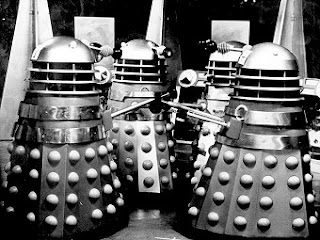 The Daleks (1963)// Premier episode ‘An Unearthly Child’ may have introduced the premise of the show perfectly but, regardless of the content of the very well received story, the Daleks steered Doctor Who into the national consciousness. In fact, arguably, we wouldn’t be discussing a half decade of the series were it not for the extreme popularity of the creatures themselves. With hindsight there are some aspects of this debut story that look dated but there’s nothing you can fault too much that isn’t technology related.

The charm of Doctor Who is often in the lack of budget rather than a generous slab of budget and with very little The Daleks does a lot. It helps immensely that the episode is monochrome – the visual effect (although not intentionally, obviously as monochrome was standard format at the time) it creates is extremely atmospheric adding much to the overall atmosphere.

Additionally, at seven episodes this is a classic example of the serial format – establishing several running plot points that would be picked up at various points along the way as the series continued. Arguably the monsters lost their scare factor over time – and it’s in black and white that they work their magic best. The Daleks not only cements the then leads somewhat strained relationship (just a small matter of kidnapping and all that) but it demonstrates that classic Doctor Who was very often ropey, more than often rushed with no time for extra takes – but it was always atmospheric and usually very well written. As a second serial, you couldn’t have asked for more really. 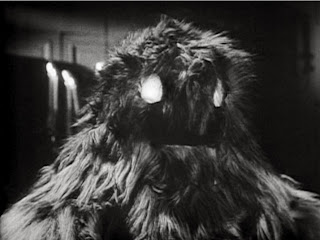 The Web of Fear (1968)// This recently rediscovered piece of television history is well worthy of a watch for many reasons; Principally because you can actually watch it now, albeit with the third episode missing. Patrick Troughton was the first actor to bear the scrutiny of ‘the new guy’ contingent and it’s a pity that much of his era is missing, but The Web of Fear is a good excuse to enjoy some often surreal set pieces and the ever evolving nature of the show itself.

When the Tardis almost gets caught in a web like substance in space, it lands on the iconic London Underground. But guess what – there’s yeti’s wandering around the place causing all manner of mischief under the guiding hand of the Great Intelligence. It’s all very surreal – with shots of the coal-ember eyed Yeti’s stalking down long tube tunnels and empty passageways becoming iconic.

Most importantly, this is Nicholas Courtney’s first appearance in Doctor Who – of many more. With the monochrome film still the norm this serial is very atmospheric and every shot looks immaculately composed and often, for example when a Yeti strikes in the home of Silverstein, use minimal light to great effect decades before it became an industry norm. The Web of Fear rocks –and still looks great five decades later! 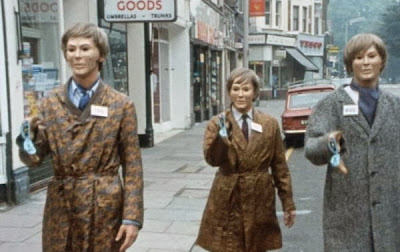 Spearhead From Space (1970)// With colour just lighting up the viewing experience for British viewers the debut of Jon Pertwee’s Third Doctor was a new experience. With a new Earth bound template and a central performance that gels with the viewer immediately it’s a fitting debut for Who in colour. The effects may not be brilliant (but budget and the time it was made are a crucial factor here) but the key scenes still have the desired effect.

Crucially, Spearhead from Space was filmed on location using film rather than the standard videotape so has aged somewhat better than most episodes of the time. Iconic imagery in the showroom dummy formed Autons smashing their way out of windows and going on a rampage? Check! A new outfit for the lead assembled, (not for the first time) from hospital lockers? Check! There is much to enjoy here – and you much reference to this first foray into televisual colour as the series continues.

As a perfect demonstration of  the flexibility of the show’s format it’s a confident first step into colour with a brand new cast (something that would happen only once more when Matt Smith’s Eleventh Doctor debuted in 2010’s The Eleventh Hour) and began an almost decade long run of excellence for the show. Jon Pertwee, known for his eccentric ways already made for a decidedly more adult tone than had previously been the case and as if that wasn’t enough we get the always reliable Nicholas Courtney as Brigadier Lethbridge-Stewart and a strong, non-screaming turn from Caroline John as Liz Shaw, arguably one of the first female characters to not be there as a convenient device for monsters to leer at and have her scream in terror.