When is a Greatest Hits album not a Greatest Hits album? Whilst The Space Lady is not the first artist to name her first recording collection after that oft-feared but not always unworthy compilation title, (Japanese band Love Psychedelico did that in the early 2000’s for a start), what makes this album unique is that it is her only recorded work from a career on the outskirts of the music scene that spans almost four decades. 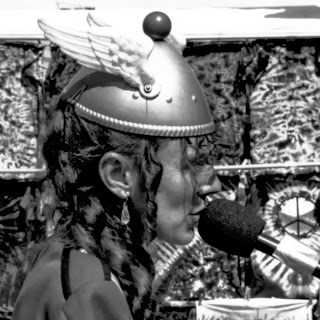 On that basis you might step back and consider that there are many artists who never record anything yet perform often – but we should be grateful for this entrancing collection of covers that transcend any derision the word ‘cover’ could bring. Instead, it’s a dreamy album that obscures any worries you may have in a flurry of dream like clouds that you can revisit over and over and never get tired.

The lead single was a dream coated version of Major Tom, originally by Peter Schilling and is perhaps one of the most addictive tracks from the collection alongside the beautifully baroque I Had Too Much to Dream (Last Night) that echoes with the Casio keyboard loops that charm you into the deceptively simple soundscape with an ease that impresses. If you’re going to do covers – this is the way to do it!

The Space Lady herself, resplendent in her winged helmet on the monochrome album cover, holds a calm presence and adds the all important mysterious element of surprise in her performance. Her wanderings around San Francisco, away from the eyes of the main scene, have clearly informed her unique style that adds her perfect mystique to some choice songs to reinterpret in her own, shot out into space on a magic rocket like manner.

Indeed, the background hissing that features on most of the album adds so much to the authenticity of the work. Finding this album is akin to listening to an unmarked vinyl from decades ago and realising that the past didn’t go anywhere. Thank Night School records for releasing an album that is very addictive – you will most certainly have too much to dream once you’ve discovered The Space Lady.