Two discs from a band with an endless propensity for music making like The Wave Pictures is perhaps a bigger meal than one would be willing to face at one time ,but here it is anyway. City Forgiveness is two discs of urban storytelling tinged music that is sometimes exciting, sometimes quiet but never less than imbued with the spirit of strolling down a hip cosmopolitan street on a sunny afternoon. 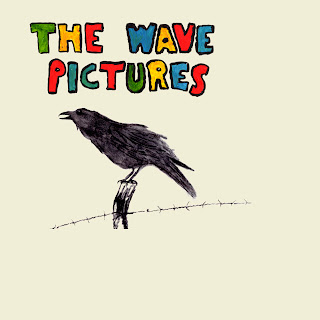 But not always, there are references to the dead digging themselves up on the distinctly Bowie like Lisbon –with the poetry come lyrics that could stand up without music to match. There is also a blackbird on a wire gracing the cover – but no such unnecessary cover song ever appears here thankfully.

There is enough funk, acoustic, and frenetic soloing to go around negating any need for any such frippery. The first disc alone would be a very good album by it self –with notable highlights including the oddly warming Before This Day, featuring a very poetic description of an idyllic day away from the city – the perfect emptiness of a country life.

The urgent intro to Better to Have Loved is also an instant grower. The jazz like grace to their often distinctly un jazz -like music is most definitely one reason to love this band and their songs, especially this one. The aforementioned Lisbon also gets a big spades up from this writer, with the funk bass that powers it along pleasing the ears in many ways.

The second disc meanwhile continues the good work of the first by lounging straight into the blues of Tropic. This followed by the delicate yet very poetic The Inattentive Reader, a story of travels and dedications. A highlight, you ask? Why yes! The high energy guitar returns as well – most notably on the addictive Narrow Lane, with a distinct Wild West element seeming to come through.

There is much more than that as well, and with twenty tracks City Forgiveness veers between city tinged poetry and landscape loving blues experiments almost seamlessly. This album shouldn’t work, but it really does. There’s something just poetic enough about its emotional content to make even the casual listener sit back and enjoy.