Episode 1: A Child of Denmark/ Episode 2: The Land is Built on Law 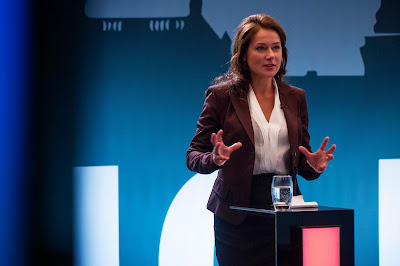 “We few, we happy few, we band of brothers…”

Borgen is back – but not for long. It’s the final season of this addictive show – resplendent in its hope, humanity and idealism. After calling an election at the end of the previous series we see the results almost immediately. It’s two and half years later and Birgitte is no longer Prime Minister. She has left politics and moved into the private sector holding positions on the board of companies across the globe. We see her in Hong Kong first, on her way to a rather silly sounding gathering of the board for a pharmaceutical company. We also see her in the company of people, family, a boyfriend and shopping without her phone ringing her to another meeting. A sea change indeed then from the insular, lonely life she was leading last series.

In recognition of new beginnings as well the episode numbering has been reset. This is not episode 21 - it’s episode 1. It was stated in an interview that this series wasn’t planned to happen so it could be connected to that – but, frankly, we’re just happy to have it back!  Change isn’t just limited to Birgitte either – it’s everywhere. Katrine and Kasper have a son and have split up in the intervening years, now sharing his care. Torben, the ever confused looking Editor at TV1 is getting pressure over ratings and content – with Katrine’s loss not helping him any more than a slap in the face.

The first episode is largely set up, with some parts feeling somewhat unnecessary but with even the trademark gorgeous furniture and scarves on minimum exposure this was truly different. But soon things would enter the familiar territory we all know and love…

“How would you feel about me going back to politics?” (Birgitte to Phillipe)

After spending so much time away from Denmark after losing the election Birgitte is feeling unhappy with her country.  New legislation is getting increasingly Right Wing and inhuman and something needs to change. With Katrine as her media advisor and Bent her faithful ear , Birgitte’s attempt to become leader of the Moderate’s fails narrowly but the visibly crestfallen politician doesn’t give up and is soon set up in new, somewhat ramshackle premises  with the idea of a new political party.

It’s here the narrative picks up (and makes you glad the double bill format was preserved for the BBC screening) and we see the action really unfold. Along the way we see Katrine enjoy some frenzied sex on the nursery floor as the new Program Director at TV1 (not beloved of Torben) joins her for a night. This begins the severance of the ties we’ve come to accept – Katrine at TV1 with Torben borderline demanding her return when she’s not there.

By the end, aggravated by the previously mentioned night of passion in the nursery and TV2’s receiving the exclusive Nyborg back in politics interview he certainly isn’t begging her any longer. Even Bent is seemingly against Birgitte’s new party – but (somewhat too soon, perhaps) comes to her side to joining the newly christened New Democrats. The scene is set for the next four weeks and whatever happens at the end you know there will be cries of encore…

See you next week!