Neil Gaiman (whom this writer has had the pleasure to meet very fleetingly) is a name that says much to fans of fantasy comics and novels. His work has achieved notoriety for its dark contexts, excellent writing and subtle characterization. 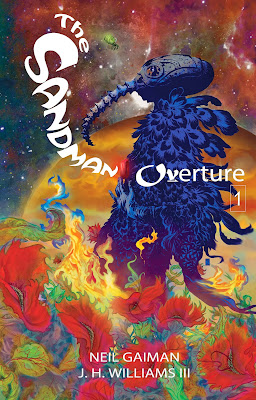 Most will think of Vertigo’s flagship line The Sandman when his name is mentioned – and when consider just how influential it was in the changing perception of comics and graphic novels it’s no surprise. The original run of 72 issues remain a very readable and endlessly fascinating collection of very literate words and painstakingly drawn inks – with art at the forefront more than on most comics. Even the numerous spin-offs from the series, including our personal favorite the various Death mini-series, are well worth the effort of reading – which makes the news of a new Sandman limited series in the form of Overture very exciting news.

It is surely a clue to its popularity that the above commercial owes its existence – how often does a comic get a TV commercial? But aside from the promotions aspect Overture is triumph in the way it draws you in – be you a regular comic reader or not. The cover art (both the Direct Sales and Variant editions) are both very desirable and it’s hard to choose between one and the other. But most importantly the story gets you interested from the very first, star-scaped frame. J.H Williams III knows how to make a panel wow the reader – and in this first issue (and no doubt the rest) the intricate and beautiful panels make for a read punctuated with much admiration of the art itself.

The strands of story are in no hurry to weave themselves together, just as in previous books, and the joy is in unraveling the often beautifully vague dialogue for salient points. One panel, showing the monochrome action as Corinthian greets Ian Stewart in his office, is formatted to be shaped like a very nasty and toothy snarl and particularly shows just why The Sandman is recommended to those not normally attracted to comics. Imagination – and the sheer beauty in it’s initiation. The Dreaming is truly a dark but beautiful place with such mysterious figures as Corinthian and Dream and the titular Sandman of course to guide us through its Gothic beauty and despite the fact a comic would not normally be this writers companion before sleep engulfs the darkness – issue two is a must read. The words of Corinthian make a good exit point…

“I’m going to kill a young man behind a public house, and before he is dead, I intend to eat his eyeballs...”