When we published our look at this albums predecessor we had no idea that just a few days later we would learn of the death of ‘The Man, if there ever was one, Lou Reed. So it only seems appropriate to take a look at the album that continued the bands journey into musical history with an ever more Hardcore experimentalism. 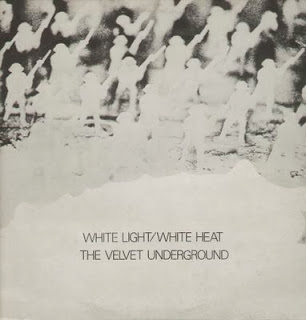 The deceptively simple title track and opener White Light/White heat is a pleasing intro to the album and in its mix of cacophonous keys, drums and guitar with vocals on an equal level gives the listener a small idea of the brilliant weirdness that would follow. The feedback laden outro leads into the still brilliant The Gift.

John Cale’s clipped Welsh accent feeds from one channel whilst the instrumental feeds from the other so that if you like one more than the other you can listen to it in isolation. But you won’t want to because the two make perfect, if very psychedelic partners, and will certainly warn you against the idea of mailing yourself in the post to a loved one. Wonder what we mean? Then listen below with headphones!

Once we get past the very John Cale like The Gift we get the very Lou Reed like in content Lady Godiva’s Operation and the quieter, almost out of place Here She Comes Now. Truly this is an album that was designed to be artful, spilt in personality and always fascinating. Indeed, when we first listened to the latter we found it strangely calm – but when you consider that the next track is the proto -hardcore I Heard Her Call My Name the need for a quiet moment in between is understandable.

And when the album ends on the epic heavy psych flavoured Sister Ray, reputedly much longer than its 17 minute album version when performed live, you see just how different The Velvet Underground were at the time. It would easy to find music like this at the click of a search button now but in terms of sheer content, theme and what might be termed as Art Rock now it must have sounded somewhat more revelatory than it does to the modern listener.

Indeed, they say that you don’t appreciate what you have until its gone – and in Lou Reed, and The Velvet Underground themselves, that is the truth. White Light/White Heat is the last album from the band to remain true to their initial creative roots to our minds – Cale would be pushed out by Reed following this album and it shows when you listen to subsequent material just the difference it made. Of course, Reed himself is still a considerable influence over the next two albums they would create (although gone with the rest of the band by the time Doug Yule released the solo album in all but name Squeeze in 1972) and it’s hard not to think of The Velvet Underground without thinking of Reed.

So – almost fifty years since its release, does it still stand the test of time? The answer is a resounding yes! Even if this record had been made today it would probably get the same reaction of awe and confusion and that is perhaps the greatest gift it can give us.

And yes, that isn't the regular cover art - it's an alternative UK release version.