Catch Up // Doctor Who: The Time of the Doctor

A host of the Doctor’s enemies circle the planet of Trenzalore as a mysterious message is sent across the stars. The oldest question in the Universe; hidden in plain sight. But will Trenzalore be the place where the Doctor dies? 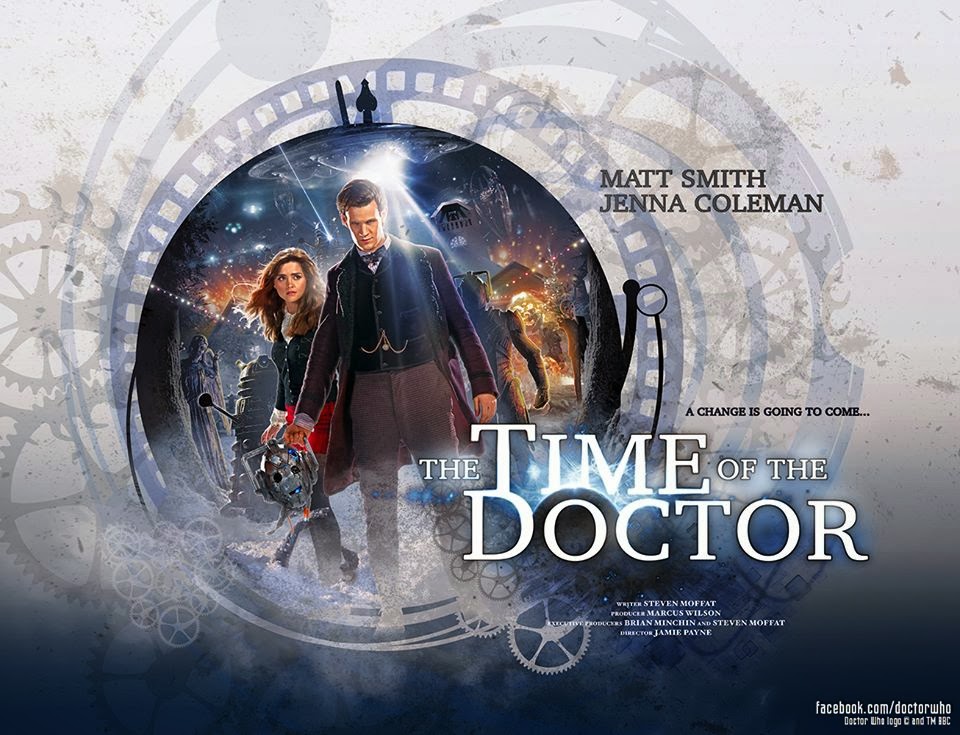 Following hot on the heels of the Doctor Who 50th Anniversary special episode, we have The Time of the Doctor and Matt Smith’s final episode playing our favourite Time Lord from Gallifrey.

After four years and numerous unanswered plot threads to tie up, head writer Steven Moffat set himself the monumental job of resolving some pretty significant issues for long-term fans while making a show accessible enough for the more casual Christmas viewer. He also had to answer a question long debated by fans – how to address the tricky issue of the 12 regenerations limit set on the Doctor.  So how did he do?

Well, by pretty much throwing everything but the kitchen sink at it. Turkey and all. In The Time of the Doctor Moffat continues with the fairytale feel he’s given the Doctor’s adventures since Matt Smith’s introduction in the sublime The Eleventh Hour. The old questions that have been floating around since 2010 are answered here with varying degrees of satisfaction, from the question of who blew up the TARDIS in The Big Bang to the mystery of who The Silence are and what they’re for.

The Doctor lands on Trenzalore and becomes trapped in a Mexican standoff with almost every enemy he’s ever faced as the crack in time, first seen in The Eleventh Hour, turns out to be the Time Lords (last seen sent off to a pocket Universe in The Name of the Doctor) trying to get back in to our Universe. The Doctor only has to speak his name and the Time Lords will return, but to do so would start the Time War all over again, meaning the deaths of billions. And so he packs Clara back off to her family and sets out to protect the people of Trenzalore for hundreds and hundreds of years in what he believes is his final incarnation.

For the regular viewer this was all very lovely, but for the turkey-stuffed, casual watcher, an awful lot of the plot of The Time of the Doctor must have been a mind-boggle of confusion. There was still lots to entertain, from Smith’s ‘naked’ Doctor meeting companion Clara’s family for Christmas dinner (with a lovely turn from Sheila Reid as Clara’s saucy gran) to the war on Trenzalore when the big guns are turned out as an assortment of Daleks, Weeping Angels, Sontarans, and even a wooden Cyberman come out to fight in a snow-covered town called Christmas.

Jenna Coleman is sweet and moving in this episode and it’s sad to see her and Matt Smith part company just as they seem to have built their Doctor/companion relationship. There’s a rather brilliant turn by Fonejacker Kayvan Novak as Handles the Cyberman head, who we’d love to see again, but probably won’t. And Orla Brady as River Song Tasha Lem is a feisty foil for the Doctor to play against. We even have a cameo from Dan Starkey as clones from Commander Strax’s Sontaran clone batch.

But The Time of the Doctor really belongs to Matt Smith, and rightly so. From the young pretender to the massively popular David Tennant’s crown, Smith has taken television’s most iconic role and made it his own. He has been a brilliant Doctor Who and a great ambassador for the show and he will be missed enormously.

In complete contrast to Tennant’s regeneration, where the tenth Doctor’s long goodbye was a drawn out affair, Moffat gives us a deliberately different beast here. Having used his regeneration energy to triumphantly blast the Daleks from the skies above Trenzalore, Smith’s Doctor appears in a beautiful and quiet moment in the TARDIS with Clara. His farewell speech is wonderfully done - emotional, yet joyful - as he sees visions of his first companion, Amy Pond, before dropping his bow tie to the floor and then – BANG! – the twelfth Doctor appeared. No face merging, no floating companion heads, no ghostly figure. Just straight to Peter Capaldi’s scary eyed face quicker than you could say “Doctor Who?” A wild departure from the recent past, but then the Smith/Moffat era has always done things its own way.

And so ends Matt Smith’s tenure as Doctor Who in an ambitious episode that I’m sure will be debated among fandom for years to come. So goodbye Matt and thanks for everything. And welcome to Peter Capaldi and whatever his Doctor brings to the best show on television.

The ‘Please Steven Moffat bring him back’ Appeal

Handles the Cyberman head. If you can chuck regenerations at the Doctor, surely you can bring back Handles?


I will not forget one line of this. Not one day, I swear. I will always remember when the Doctor was me.