We were present at the launch of Liverpool based singer songwriter Jo Bywater’s new E.P Chasing Tales earlier this year and when we heard the news of a new video we scheduled a chat with the artist. Chopping Wood is the first song extracted from the E.P and you can learn more about the process of its creation and watch the video below…

One / Your new E.P Chasing Tales was released earlier this year. How does it feel now it’s out in the world?

Fresh... and an achievement!  It was great to do the launch and the hard work and emails is really paying off.  It has been a new lease of life for my next stage of writing and I’m now ready to do more writing towards my album.  It’s getting some great feedback.

Two / The first video to come from the release is the Chopping Wood. Not all songs are naturally visual, what made it a natural for a video? 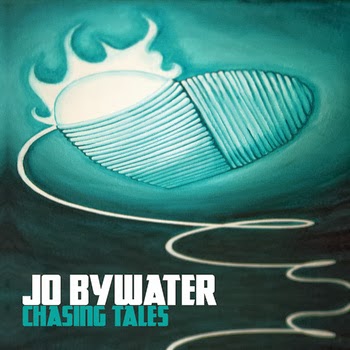 The metaphors make this an easily visual song for me.  There’s a lot of ‘chopping wood’ and fires and the churn of life going on in this song and I think the visual lyrics make it an easy to visualise song.

Three / Tell us about the initial creation of the song. How did it come about?

I had the guitar riff first. I had been getting into slide guitar and bought a resonator and was playing around with loads of riffs and new sounds.  I had the beginning riff to this song that was quite bouncy and really wanted it to be a song and the lyrics ‘chopping wood’ just kept cycling in my head.  I tried to steer away from it a little bit because I thought it might be a bit cliché and ‘lumberjack’ and didn’t really know how I felt about it.  However… those words just wouldn’t go away so I had to just let them do their thing.  Once I hit that stage the rest of the song came together really easy.  Lesson being…don’t try too hard!

Four / The songs from Chasing tales are strikingly different than that of your previous release. What challenges did the recording present to you?

I like to be always growing, new guitar skills, different ways of using my voice.   I plucked up enough courage to just do what came out and went with it.  I recorded the songs myself and really spent a lot of time fine – tuning the writing process.  Once I had the 4 songs I did a lot of planning on how I wanted them to come across.  I’m happy with what I came out with.  I basically learned a lot about recording, communicating songs and not being afraid to go with your flow.  I learned to play harmonica and slide guitar, so they had to be to a standard worthy of recording.  A lot of preparation, rehearsal and research went on for this recording.  I pushed myself and my skills.  I did start getting tired at one point during the mixing but I powered through…

Five / The making of the video is perhaps the final stage of many in the life of song. Tell us about the shoot itself. There is much of the proverbial chopping of wood in the video…

The shoot was amazing.  I approached Andrew Ab to make the video.  He’s done some amazing videos and I really wanted to work with him.  It was professional and a great vibe.  Day one was a freezing day and we were outside for 5 or so hours but everyone seemed to really enjoy the whole experience.   The man responsible for chopping the wood was Andy Jones from Just by Chance.  He showed up and had to learn how to swing an axe properly without chopping his leg off. He nailed it and went away with a whole new skill.

I had invited some people who came to my E.P. launch to be in the vid, younger guitar players who came with their parents.  I wanted them to be in it.  I thought it could be really inspirational! They had a great time and were very excited about seeing the vid.  Day two we filmed in an office to film scenes that would be cut in to tell a story. The whole team of actors and crew and Mr Ab were a breeze to work with.  Andrew had already come up with a story line and visual ideas so doing the shoot itself was pretty straight forward.  I let him get on with it and I just made sure there were plenty of refreshments for people!

Six / The season of giving is near. What would you like from the man in the red suit if you could ask for anything?

To open up on tour with Pearl Jam and Ani di Franco and a Fylde guitar!

Seven / What message do you hope listeners go away with after watching the excellent video for Chopping Wood?

It depends who they are…1) for young musicians - to go away and know they can do this for themselves. 2) Agents and industry-to remember write my name down.  3) Everyone – to take on board the message to make sure they put time and effort into doing things that resonate with their souls.  AND just enjoy the song & vid!

Eight / What does the next year hold for you?

A tour for the EP at the beginning of the year; Writing for the album. Turn up the heat more and more and go with the momentum this is bringing; Some collaboration.  I also have a song that will be on a great compilation album of blues artists as well in the Spring.

Interview by Sebastian Gahan. You can find Chopping Wood on the Chasing tales E.P. available from jobywater.com.