A name like Ambrosia Parsley is not easily forgotten. When we first saw this artist she was appearing with her former band Shivaree on Later and we were instantly hooked. That was more than a decade ago and following the breakup of Shivaree we have a solo album in the form of the excellent Weeping Cherry. 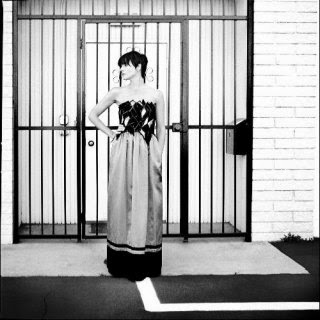 Mooted since three years ago it recently made its appearance in the digital world with a very stealthy whisper and if you’ve ever heard her voice you’ll know that it’s a unique one. Simultaneously languid yet never without that slight hint of something dangerous about to happen about, this album sees Parsley back in music room with style.

Weeping Cherry has been taken time over – and it shows. This is not a quick session in the studio – it’s a subtle story. The dark, film noir like elements of Shivaree remain but they are more refined, less weird than her former band’s debut I Oughtta Shoot You In The Head… but still listenable in a mysterious graveyard kind of way. There are many reasons to suspect the darker edges have been deliberately muted but even if that were the case this is a very delicate yet dark collection of songs.

Some more than others! Opener Empire and the darkly adorable Skin and Bone notably closer to the art rock of earlier work. The latter poses like a smoky jazz ballad; Parsley’s voice showing just what it can do with an ease that makes it seem like a lot shorter a gap since we heard her on new material.  The slower moments too are delightful in the fullest sense. The subdued but well balanced production gives the voice that could distract from all else a connection with the music.

Highlights for this reviewer include Only Just Fine, with its lo-fi electro-ballad setting just beautiful. My Knees also lets the album rock out a bit, in the most sophisticated and restrained of manners. On a (sonically) often muted album it’s a comparatively more robust highlight. It’s tempting to describe much of Weeping Cherry as dream pop but it’s much more than that in genre terms.

A writer with lyrics as good as Parsley’s is capable of much more than conforming to a genre – and we get subtle elements of jazz, lo-fi and the kind of songs that Nick Cave has been growling over for many years. Of course, Parsley’s not talking of murder ballads here (see previous work with Shivaree for that) but more gentle contexts with no less of a powerful, almost spoken voice Blues voiced narrator.