Music, as they say, is a timeless thing. Newly released for the cold months is this new E.P from Leeds band Slowcoaches. “THINKERS” doesn’t like to express it’s thought with the subtlety of a snowflake hitting the ground gracefully – it’s an expression with somewhat more bang than any regular drop of ice. 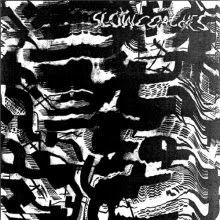 Opener and title track Thinkers sets the agenda with a garage band style production and noise pop cool that doesn’t drown you in excellence but puts you in a good enough mood to sit and listen to the rest.

The whole E.P, all four tracks of it, fly by in a sea of joyous noise and although it’s brevity is not a bad thing it’d be nice to stay still even if for brief few seconds. The most instant of the quartet of songs is the wonderfully titled Biennal Drool – with a more focussed composition and a more balanced production.

This is music that is definitely intended for the live setting, the recordings here only just viciously scratching the surface of the core appeal. Thankfully closer Nightlife shows us a more vocally clear picture of the band and sets up a direction that will hopefully see the band getting better and better.