The Traps impressed us earlier this year with their singles Moving Pictures and The Honey Drip and the album they were extracted from is Calypso. Released earlier this year it’s one that takes a few listens to get into properly, (always a good sign), but once you do it becomes all that more interesting... 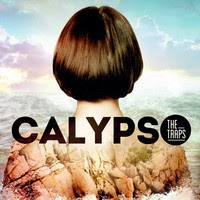 The title track is itself an upbeat affair, with some pleasing guitar work to take in and a production value that doesn’t do them any harm. The aforementioned Honey Drip is a definite highlight, the opening bass riffs and earworm chorus truly running around your mind like the titular substance. There is some seriously good song writing on show here and it’s an addictive moment that the rest of the album doesn’t come close to very often.

Over the eleven tracks we see many reasons to love The Traps and it’s not just for their good ears for a melody. Moving Pictures is another highlight, unsurprisingly a single, and with the strong vocals on show and the passionately played instrumentation never failing to lose the listeners ear. There are moments of excellence throughout the album, often within the songs that are more obviously album tracks.

The vocals of Eyes Open, the intro to My Grip or the riffs on Hornet’s Nest are all such moments but it’s an album with a strong opening trio and reliable closing section. Calypso is the sound of a band that is one or two albums away from their magic moment but for now coasting along on the creative energy of their musical creations.