Warning: This review is FILLED with spoilers!

If you’re not familiar with his work, you should be aware that the sight of the words “WRITTEN BY STEVEN MOFFAT” on screen generally means, “Sit up and pay attention, dear, because things are about to get a bit twisty-turny.” And this Sherlock series three finale is no exception.

Where episode two The Sign of Three saw a (sort of) break from the usual Sherlock formula of solve-a case-per-episode, His Last Vow is back on more familiar ground, although with Moffat’s evil genius writing behind it. 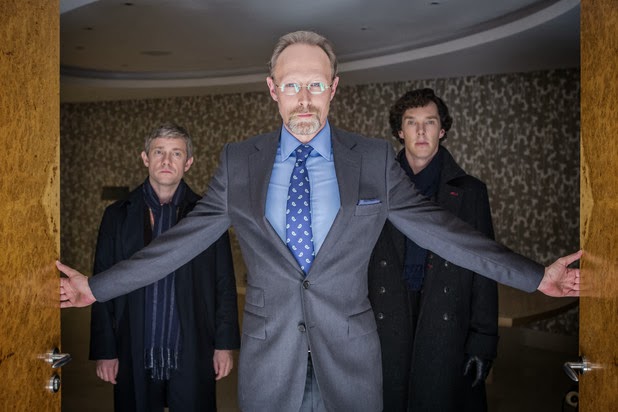 Villain of the week Charles Augustus Magnussen is a, no – the – master blackmailer who has the goods on everyone in the Western world, and probably beyond, who matters. And this includes John’s lovely new wife, Mary. Using Terminator style point-of-view on screen text, Magnussen knows the “pressure point”/weakness of everyone he encounters.

His Last Vow starts with John discovering Sherlock in a drugs den after Sherlock has vanished for a month since John and Mary’s wedding. Sherlock is acting for Lady Smallwood (a woefully under-used Lindsay Duncan), who is being blackmailed by Magnussen, while John is trying to fill the Sherlock-shaped hole in his life.

More astonishing to John than the involvement of the world’s greatest blackmailer or Sherlock’s possible relapse into drug addiction, is the fact that Sherlock now has a girlfriend (!) – the brilliant Janine from The Sign of Three – and the possibility of them having dinner as a foursome. Yasmine Akram is once again on great form as the saucy, clever Janine. But of course, nothing is quite as it seems with Sherlock.  No, Janine is Sherlock’s way in to Magnussen’s locked-down empire.

The old saying that “knowledge is power” was never truer than here and Lars Mikkelsen brings a fascinating, gimlet-eyed malevolence to the role of Magnussen, a man of extraordinary power thanks to the unknowably vast information he has stored in “Appledore” – his secret vault. A vault that includes a damning file on the fragrant new Mrs Watson.

The on-screen LIAR LIAR LIAR graphics from Sherlock’s first meeting with Mary in episode one are proved to be entirely correct as we discover that Mary is, in fact, an assassin who has assumed the identity of a dead woman. Having shot Sherlock while attempting to kill Magnussen, Mary becomes a rather reluctant client with a case for Sherlock and John to solve.

There are some stand-out scenes in His Last Vow; notably Sherlock’s “mind palace” as he works out how to survive being shot (did anyone else jump up and cheer as the spectre of Moriarty appeared?), and the scenes of almost-cozy Christmas domesticity at the home of Sherlock and Mycroft’s parents’ home (Benedict Cumberbatch’s real-life dad, Timothy Carlton is just lovely here) as John and Mary confront what has happened while Sherlock and Mycroft plot and hide their smoking habits from mum like a pair of naughty teenagers.

Typical of Moffat, the plot of His Last Vow is full of twisty-turny stuff as it covers Magnussen’s manipulation of the “pressure points”/weaknesses – of a trail of characters from Mary to John to Sherlock and ultimately, Mycroft Holmes – the most powerful man in the country, after Magnussen. We also discover what should have been glaringly obvious about the nature of John Watson and the people he chooses to have closest to him.

In a stunningly shot showdown, when faced with the fact that Magnussen’s “Appledore” was not what we’d thought it would be, Sherlock does the only thing possible and destroys it. And with dire consequences for him. Unable to send his brother to prison, Mycroft does the next best thing he can and packs Sherlock off to exile and an almost-certain death working undercover in the East. Well, for about four minutes anyway.

In an excellent and fan-pleasing moment, Sherlock is hastily recalled as the face of Jim Moriarty appears on ever TV screen in the country accompanied by the words “Miss me?” Why, yes, Jim! As it happens, we have.

And so it turns out that the question of “How did he do it? How did he fake his own death?” will once again fill the dark, plot-unravelling, theory-riddled recesses of the internet, where these things are debated ad nauseum, for another year until the return of Sherlock in series four.

Like the return of the man himself, we may never know how he did it, but we’re glad he did.